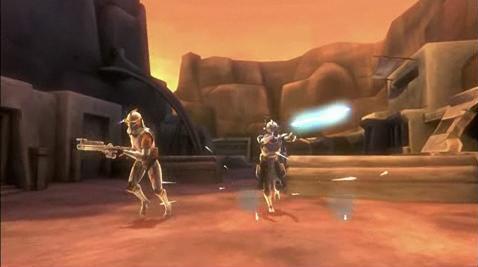 Officially unveiling a rumored title to Entertainment Weekly, Krome Studios and LucasArts are showing the Playstation 3 and Xbox 360 some Clone Wars love with Star Wars The Clone Wars: Republic Heroes this September 15th.

The game will feature two-player co-op throughout the campaign; we're surmising from the gameplay trailer that online co-op is included, but neither online nor splitscreen are confirmed yet.

The game looks like a run-of-the-mill platformer/beat-em-up/shoot-em-up...standard Star Wars fare. I'm already envisioning Marc establishing who is the Master and who is the Apprentice at the Allie Temple.

Click here or on the "Source" link to see the trailer.