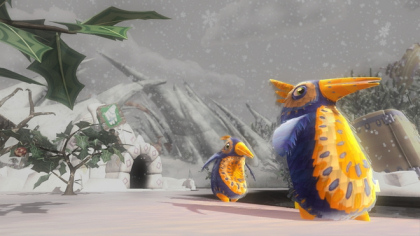 It was previously reported, though the details were sparse.  But now we have the goods as well as some hands on impressions of the Viva Pinata sequel courtesy of Wired.

The co-op mode in the Viva Pinata: Trouble in Paradise will be limited to one box, but you can play it at any time simply by starting up the second controller.  The second player will be able to assists in tasks like watering and gardening, but as a bonus, they'll do this at a much higher level than the first player.   While this opens up the possiblity for people to cheat simply by playing co-op by themselves - Rare said "go right ahead!"  There's even some co-op specific bonuses you can get for working well together.

One other added feature to the new game will be the addition of physical cards that a player can scan in.  Basically these cards are physical representations of the Pinatas in game, and can be used to trade pinatas between people - an extension of the already in place crate system over Live.  The coolest aspect is the cards don't necessarily need to be physical, they can simply be an image on an iPod or computer screen.

Overall the new Viva game is supposed to be more accessible with a "just for fun mode" as well as the addition of co-op.  Soon you'll be able to team up with your buddy and walk poor helpless worm pinatas until they explode with candy and happiness.  Joy!

Be sure to check inside for some new screenshots of the title.