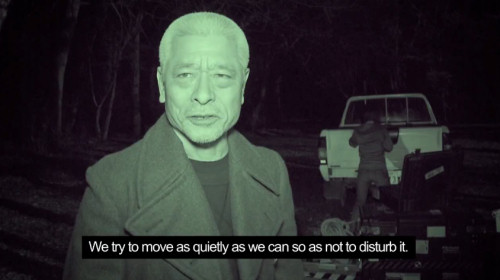 They may try to move quietly, and the monster might be "pretty small" but I'd still bring some heavy weapons.  Perhaps it's the giant glowing eyes 25 feet in the air that does it to me, but I think they are going to need more than some rope.

I've never played any of the Monster Hunter games, but I imagine it involves monsters and.."hunting."  The latest game in the series is called Monster Hunter Freedom Unite and is a four player co-op title for the PlayStation Portable.  From all intents and purposes, it's the same game that was released in Japan under the name Monster Hunter 2g.

Now if I were to hunt monsters, and I'm not saying I would or will; but if I did I'd probably use a site like the Encyclopedia Gigantica to find just what kind of monster I'd like to hunt.  Preferably I'll take one that is small, fluffy, and poops gold.

Monster Hunter Freedom Unite hits the PSP this June.  Be on the lookout for it.  Perhaps these guys know where you can find a copy?