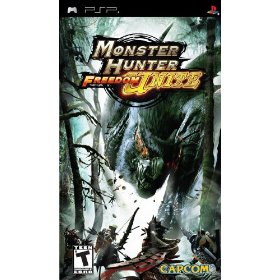 The latest game in the Monster Hunter franchise, subtitled Freedom Unite, is being released today.  You and three others can team up together via Ad Hoc play.  One particularly cool feature of this game takes a page from the PSP's big PS3 brother: an optional install allows for quicker loading times, and presumably saves a bit of battery life as well.  Ars Technica has the details.

"Use this 'Data Install' option to shorten loading times. A portion of the game will be saved as 'Install Data' on your Memory Stick Duo," the game explains on its option menu. "The game will then load data from both the Install Data and the UMD." The install requires 578MB of memory to take advantage of this feature.

That's a good sized chunk of your memory card, but still it's a great idea.  Perhaps as memory cards get bigger and cheaper, more developers will use similar options.  Don't forget you can purchase the game at Amazon and support Co-Optimus!