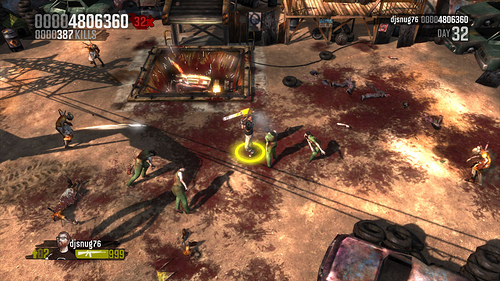 Last month Konami announced Zombie Apocalypse for the PlayStation Network and Xbox Live Arcade.  The PlayStation Blog posted an article from John Slavin, the game's developer from Nihilistic.  John talks about the game's roots, the core gameplay concepts, and the co-op modes.

According to John the game is rooted in games like Robotron and Smash  T.V. in its dual analog stick nature.  From the get go they wanted a fast paced, fun and cooperative game. Their goals was to have a pick-up-and-play, gory party-game fun, but still deep enough and tense enough to stand out. Multiplayer was a key feature in a game of this type, so it was a no brainer to push hard for four-player online co-op integrated from the start.  And that's exactly what they did.

There's a lot of inspiration from popular horror movies, which can be seen in the level design.

In the best zombie films, the environment is as much a character as any of the victims, and we weren’t content to let our backdrops be only set-dressing. To begin, we wanted to find locales that would reflect the best moments in zombie film history. We have a graveyard with a crematorium that spews green gas, in a nod to Return of the Living Dead. Then there’s the woods surrounding the lonely cabin of a certain Dead turned Evil.

The best thing about these environments are the hazards that come into play.  By utilizing the environment to kill enemies, you can score big points.

Sure, you can plug that zombie with your M-16, but can you lure him into the wood chipper along with a half-dozen of his shambling friends for big score bonuses?

There are spinning rotors and a jet turbine in the Airport, car crushers and grinders in the Junkyard, and an out-of-control garbage compactor in the Town Square.

Every game mode in Zombie Apocalypse is available for four player co-op play, including the main game mode - 55 Days of Terror.  In it players are tasked with surviving 55 levels of zombie onslaught.  With a chainsaw on your back, your M16 in your hand, and your friends by your side it'll be time to hunker down for a long night of co-op zombie killing goodness.  If all goes to plan this should be hitting next month some time.