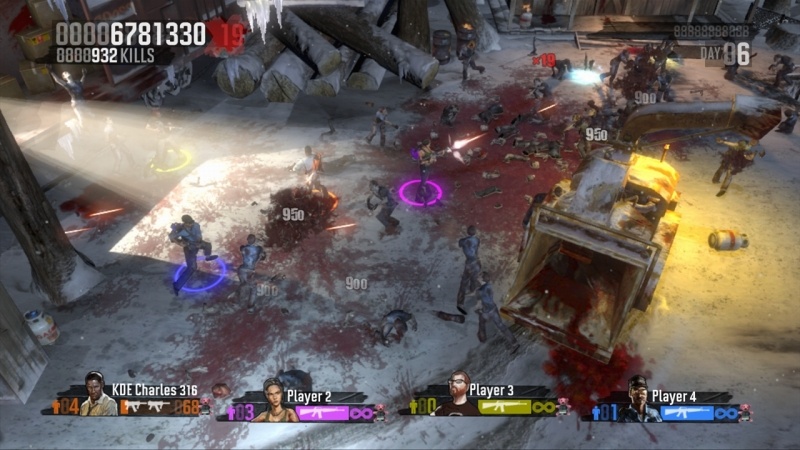 For the past month or so, I've been in a bit of a gaming funk. My loyal ten-year old co-op partner and I have pretty much wrapped up all the games in our collection. The War in the North was ended successfully, and we managed to survive Raam's Shadow, leaving very little in the backlog. So, we scrolled through the long list of Xbox Live Arcade games to see what struck our fancy for our gaming time this week. There are literally dozens of games there that are perfect for short bursts of co-op gameplay before dinner.

One that struck our eye first was Zombie Apocalypse, an undead themed twin stick shooter. Up to four players can team up to survive while be attacked by wave after wave of the relentless dead. While the content and screenshots may seem gruesome, there's a sense of humor to the whole thing that I find quite appealing. I mean, come on, there are zombie grandmas who toss instant-kill daggers, and also explosive stuffed animals. What's not to like?

Another go-to game for a few crazy minutes of co-op fun is Toy Soldiers: Cold War. The theme of a toybox full of soldiers, airplanes, and tanks coming to life fits a tower defense game perfectly. While the action is hectic, the split screen view lets both players manage different areas as needed. While the campaign itself was a bit short, we've enjoyed going back for the various survival modes and other minigames. The commando power-up is a particular favorite, spewing forth memorable lines that we use often in our daily interactions (I.E., when he won't go to bed, I yell "YOU'RE PUSHING ME, SIR!").

Sometimes, though, you don't even have a half hour. What are a couple co-op fans supposed to do? Simple, head back to the old reliable: Geometry Wars Retro Evolved 2. Intense graphics, great music, and unabashedly intuitive old-school gameplay combine perfectly. If you and a partner fire it up just long enough for one three minute session, trying to best your previous high score, then you will have very wisely spent one-twentieth of an hour.

Many other Xbox Live Arcade games are fantastic in short bursts. Plants Vs. Zombies is charming every time, and South Park Tower Defense, while less kid-friendly, is still a hoot. And the retro releases like X-Men and TMNT Reshelled are always worthy of consideration. The rise of the downloadable game has brought a wave of titles that are perfect for short gaming sessions. While we all love a big co-op steak like Halo Reach or Dead Island, sometimes you just want cheese and crackers. Any of the games we've discussed today will give you plenty of co-op gaming to satisfy your fix, and can do it in a short time.