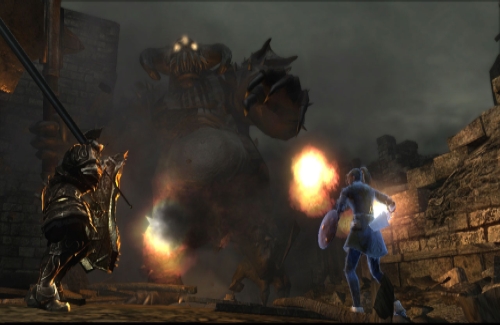 Publishing company Atlus, best known for the Shin Megami Tensei/Persona series of games, announced yesterday that it would be bringing From Software's, best known for the Armored Core series, action RPG Demon’s Souls to our shores.  Being billed as a “hardcore RPG,” this title, which saw a February release date in Japan, features the one element that we here at Co-Optimus always want to see more of: co-op.  Two other players will be able to join you in your quest to hack, slash, and quest your way through goblins, dragons, and other fantastical creatures.

The premise of the game is nothing terribly new (i.e., a king dabbles in powers beyond his comprehension, awakens a terrible evil, and you’ve got to set things right), but the game mechanics seem to be where this particular game truly shines.

Based on reviews of the Japanese version of the game, it sounds like rather than take a Diablo or Marvel Ultimate Alliance approach of sending waves of the ranged/melee/magic archetype baddies at you, Demon’s Souls focuses on single enemy encounters where the enemies can use the same abilities and spells as you; only they’re are bigger, stronger, and a little better than you at using those abilities.  Think Shadow of the Colossus-style monsters/encounters mixed with the strategy planning of a jRTS-type game where success is not guaranteed, or expected, the first time.

Aside from the key features highlighted above, Atlus wasn’t forthcoming with any further details about Demon’s Souls other than its slated release stateside some time Fall 2009.