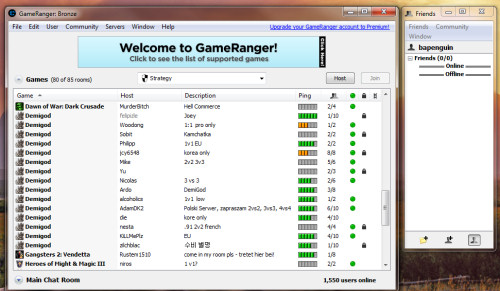 It's been well documented that Demigod has been having some server issues.  And while the game should be about up to snuff at this point, perhaps you are just fed up with things.  That's where GameRanger comes in.  Never heard of it?  According to the GameRanger team it's the longest running multiplayer service, having launched on the Mac back in 1999.

In fact, GameRanger helped give the Stardock folks some breathing room to work on the issues. Stardock president, Brad Wardell, said: "I have fallen in love with a new program called GameRanger."  I fired up it up this weekend and it seems pretty straightforward, with very minimal effort to find and join any type of game you wish.  There's basic tools like friends lists, chat, as well as ping and connection indicators.

The service is free and currently supports over 500 games, plenty of them co-op too.  You can find out more at www.gameranger.com.