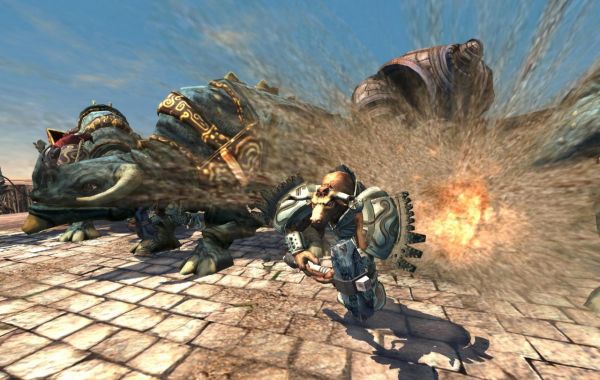 Perhaps it's a bit ironic, perhaps a bit fitting, but on the day the Pirate Bay Trial Guitly Verdict was handed down Gas Powered Games has addressed some of the issues plaguing Demigod.  If you've picked up the game recently and tried to play online, you may have noticed that...well it's not working.  At least not very well.  The reason behind this?  Pirates - and I don't mean the Somalian kind.

According to the latest Demigod journal post, the game is currently seeing about 120,000 connections.  Gas Powered games had estimated about 50,000 at launch.  The problem here is over 100,000 of those connections are via pirated copies of the game.  That's right, the ratio of warez'd copies of the game to legitimate users is 5 to 1.

Apparently it's not an easy fix either, and despite knowing all those pirated users, Gas Powered games is unable to simply "block" them from utilizing their online infrastructure.

So anyway, we spent a lot of time today  trying to isolate out the warez users from the legitimate users (it would require a lot of surgery to actually break them and even if we did, there’d be no friendly “ha ha pirate” message which would result in people just saying the game is buggy).  Mind you, the game makes relatively few server calls, it’s just the sheer number of people.

Their solution is to shuffle the warez'd users to one set of servers while the legitimate users will be on another set.  That's pretty kind of them to keep supporting the illegal users, but  I'd think they could come up with a more...permanent solution.

We'll be bringing you a review and info on exactly what the co-op modes are in Demigod sometime in the near future, but for now we'll let all this technical crap be battled out.  Somehow I get that mental picture from the beginning of Monty Python's Meaning of Life - the office Pirate Ship Battle.