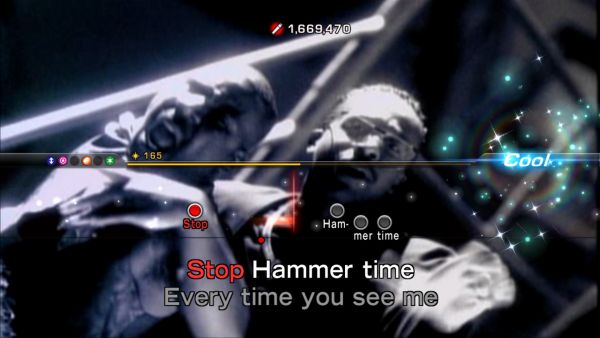 It's time to dig out the parachute pants and eat some California Raisins.  The recently rumored sequel to co-op karaoke game Lips has officially been announced.  Titled Lips: Number One Hits, the game will include only songs that reached #1 on the charts.  Not much has been said about gameplay changes, making Number One Hits sound more like an expansion, and not a true sequel.

A few songs from the game have been revealed already.  MC Hammer's "U Can't Touch This" will be an embarassing pleasure of mine.  "Karma Chameleon" represents early 80s pop quite nicely.  Extreme's "More Than Words", Marvin Gaye's "I Heard It Through The Grapevine", and "Pretty Woman" by the awesome Roy Orbison are obvious inclusions.  There's also some band named Coldplay, too, I'm sure all you whippersnappers recognize them.  Now get off my lawn!

No word yet as to whether the DLC from the first title will be compatible, but I'd predict it will be.  Hopefully they'll pull a Rock Band 2 and let you export all the songs on the Lips disc!  Lips: Number One Hits is headed to your Xbox 360 this October, but in the meantime, check out the announcement trailer.

From Coldplay to Culture Club, and even MC Hammer, the second title in the “Lips” franchise offers a diverse collection of global chart-topping tunes

Grab your friends and family and warm up those vocal chords! It’s time to transform your next get-together into a memory-making musical affair with “Lips: Number One Hits.” Combined with the original “Lips” game, “Lips: Number One Hits” sets the stage for the ultimate singing party with a new collection of global chart-topping songs to satisfy even the choosiest of performers. So regardless if your preferred stage is an amphitheatre, or just your living room, everyone will love the latest from Xbox 360’s exclusive singing franchise.

Hitting store shelves in October 2009, “Lips: Number One Hits” features popular tracks spanning diverse genres and generations that have graced the No. 1 position on major global charts. These top tunes include:

· “Disturbia” by Rihanna: the artist’s longest lasting hit on the U.S. Hot 100 chart

· “U Can’t Touch This,” by MC Hammer: the artist is set to make a comeback by starring in his own reality show this summer

· “More Than Words,” by Extreme: this tender acoustic ballad ironically was the metal band’s most successful single

· “Apologize” by Timbaland featuring OneRepublic: the most legally downloaded song in the U.S.

· “I Heard It Through the Grapevine” by Marvin Gaye: a landmark song in pop music, it’s on Rolling Stone’s list of The 500 Greatest Songs of All Times

· “Oh, Pretty Woman” by Roy Orbison: this song was inspired by Orbison’s wife as she “walked down the street” to the store and Orbison finished writing the song by the time she returned

· “Ready, Set, Go!” by Tokio Hotel: this is the German band’s English version of “Übers Ende der Welt” which was a also a number one hit

· And many more yet to be announced!

Combined with the power of the motion-sensitive LED wireless microphones, which are compatible with the top third-party music games releasing this fall, “Lips: Number One Hits” should let even the shiest closet singers grab a mic and strut their stuff with friends and family.

“Lips: Number One Hits” and the original “Lips” game combine to create the ultimate singing party, with more songs to keep the fun rocking all night long. But for singers with an insatiable appetite for variety, both the Xbox LIVE Marketplace and the in-game Get Music Store feature a vast library of tunes that can be downloaded for both titles. New tracks of all genres and artist-specific songs packs are added regularly each week, so personal catalogs can keep growing and growing. “Lips,” combined with the power of Xbox LIVE, makes Xbox 360 the best destination for music game fans.