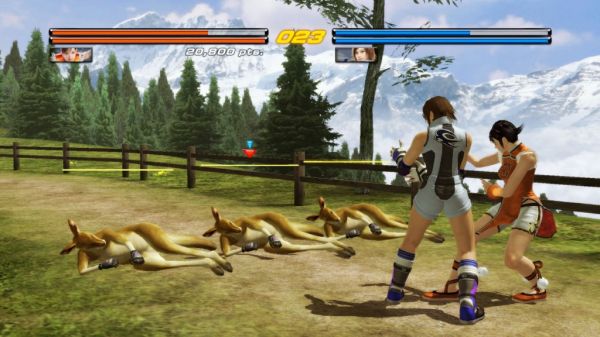 Tekken 6, the elusive arcade game, is finally coming to the Xbox 360, and Playstation 3 consoles with a few nice additions. Since we've got the story, that's right, co-op will be included in the story campaign mode. The level of depth added with co-op and other new features to this classic fighter is sure to deliver. With destructable environments, additional characters to the familiar cast, weapons and upgrades, as well as some of the most amazing visuals you'll see in a fighting game.

A few details right from the press-releases mouth.

"The Scenario Campaign features a unique hybrid control system combining conventional fighting game controls with free movement. This control system allows players to progress through the story and mow down hordes of enemies with relative ease while still enjoying fighting game action. In addition to hand-to-hand fighting, players have an arsenal of staffs, machine guns, flame throwers, and even giant robots at their disposal - a first for the series!"

There will be 40 playable characters to co-op with in a number of unique stages. While playing the campaign mode, you'll pick up character customizing items that can be used in the versus mode online! We look forward to getting some previews up for you, with impressions to see exactly how this normally-versus-game operates in a team format. To add to this release, the Playstation Home will be getting a Tekken makeover with many skins available to characters. Also, the PSP will see it's own port of Tekken 6 with more items, content, and unique multiplayer features sometime this fall!