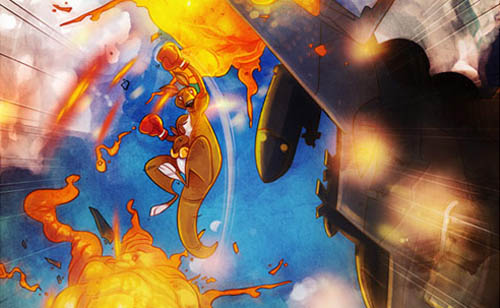 I'm not sure, but I'm pretty certain the cover of the official Tekken 6 comic, written and drawn by the folks from Penny-Arcade, has a Kangaroo punching a fighter jet.  I'm also pretty sure I don't need to tell you anything else about it other than that to make you head over to the official site to check out the first 3 pages.

The comic is set in the official Tekken universe, but with the traditional Penny-Arcade humor we all know and love.  Tekken 6 will feature an online two player co-op campaign that plays in a similar fashion to old school beat em ups.  For the first time players will be able to not only punch and kick, but pick up weapons like guns, staffs, flamethrowers and even giant robots to use to dispatch enemies at will.