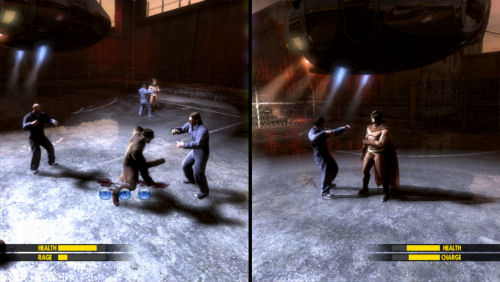 This just in from the "no duh" department: Watchmen: The End Is Nigh, Episode One was overpriced.  Most gamers seemed to feel this way, but even director, Søren Lund of Deadline Games, agrees.

Considering that Episode One was fairly short, even for an episodic game, we tend to agree.  The End Is Nigh Part Two is coming next month, and as of now, no pricing has been announced.  Lund speculates that it will be released at $10, as it is about half the length of the first release.  Half of an already short length?  Sounds like Episode Two will be shorter than the film itself!

You'll recall our previous news about a retail disc with both Episodes being released for PS3 and Xbox 360.  Pricing at Amazon suggests $30 for the 360 version, and $50 for the PS3 version, which includes the movie itself on Blu-ray.  That bundle sounds like a good deal, until you consider that the Director's Cut Blu-ray, which includes another disc of special features, and a digital copy, costs $22.  $30 for 6 hours of gaming?  That puts Watchmen: The End Is Nigh at near-Terminator: Salvation levels of "value".