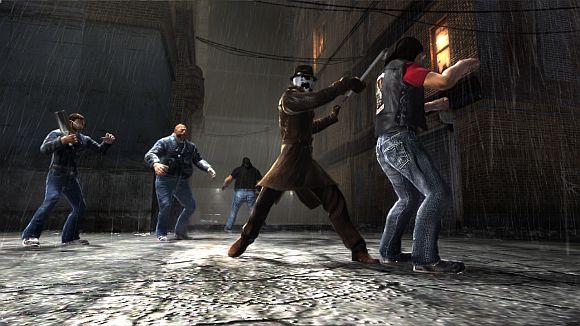 This week, the film version of Watchmen is released on DVD/Bluray.  Along with the movie comes the second half of the tie in game, Watchmen: The End is Nigh.  You'll recall that the first part was made available when the movie was released in theaters this past spring.  The pricing and release date information have been made available, and it's so confusing that your brain just might turn into a mildly telepathic alien squid when you try to comprehend it.

Tomorrow, July 21, sees two releases.  One is the Xbox 360 version of The End is Nigh, including parts 1 and 2, retailing for $30.  The other is Watchmen: The End is Nigh The Complete Experience.  This package combines the Extended Director's Cut of the film with the PS3 version of parts 1 and 2 of the game.  "Exclusive artwork in a premium package" is also promised, all for $50.

What if you already have part 1?  You'll have to wait a bit for your Watchmen game fix.  The End is Nigh part 2 releases July 29 for PC, July 30 for PSN, and all the way back on August 26 on Xbox Live Arcade.  Part 2 will set you back $15.  See?  Told you your brain would mutate.