River City Ransom has quite a following for a relatively obscure NES title.  A few years ago, the game was given the 'EX' treatment for the Game Boy Advance.  Last month, the NES version hit Nintendo's Virtual Console for the Wii, priced at $5.  Given the cult classic status of the game, and the promise of co-op, I decided to check it out.  I brought along my oldest son to help with the "testing".  (I hope you appreciate all the sacrifices we make here at Co-Optimus for our valued readers!) River City Ransom begins in classic NES fashion: a screen full of text gives you all the story you need (someone's girl has been kidnapped, we got it!) and then you are dropped right into the action.  Players take the roles of Alex and Ryan.  One of them is wearing blue pants and a white T-shirt, and the other is wearing white pants and a blue T-shirt.  I have no idea which one is which.  The environment is a typical city, and immediately you have to fight some generic bad guys.  That's literal; the first baddies are named "The Generic Dudes".  The localization crew must have been working overtime that week!  You can punch, kick, dash and jump your way to victory.  Interestingly, when your enemies are defeated, they yell at you.  Most noteworthy among these battle cries?  "BARF!"  Almost Shakespearean, isn't it?

Though the gameplay, at its core, is very simple, there are several interesting twists.  Many weapons are available in the game, ranging from simple rocks to trash cans and lead pipes.  You can pick up your enemies and toss them around, too!  Each weapon has different strengths: for example, the chain gives you a much longer reach.  When you defeat rival gang members, they sometimes drop coins.  It is this aspect that gives River City Ransom its depth.  All this money can be spent to improve your character at... the mall! 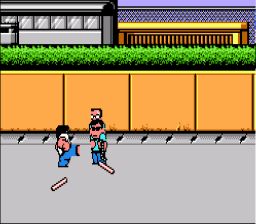 Alex and Ryan are good teenagers, and spend lots of time shopping at River City's malls.  I was astounded at the variety of stores.  The first mall alone has four stores, such as a sushi shop and a bookstore, and two dozen items or so are available all together.  Honestly, River City Ransom didn't appeal to me much, at first.  It seemed like a simplistic beat em up, and no more.  But the items you can buy raise stats and give different abilities, as well.  (The game doesn't even mention stats at all until you start buying items; you can see them from the menu but we didn't check them out at first.)  There are ten stats in total, including punch, kick, and stamina.  The best things to buy are books, which teach special techniques.  These techniques are pretty crazy; equipping a Stone Hands book makes your punches three times as quick, which makes a huge difference!

It can be frustrating to play a twenty year old game at times, but River City Ransom still managed to be fun.  While I certainly missed easy to use menus, tutorials, and fancy graphics, this game still kept my interest.  The game was groundbreaking in many ways.  The depth of the character customization is quite amazing, even by modern standards.  The environment is open ended, allowing players can move back and forth at will; this still isn't the standard today (though it should be).  The graphics were very impressive for an NES title, too.  There is only one thing I would change: players can damage each other.  "Friendly fire" is on, and there is no way to turn it off.  Hit detection is pretty tough in this game anyway, and adding in the fact that you can punch your buddy too makes it even more difficult.  However, I must admit that I did get a bit of entertainment from throwing my son's dude around the screen repeatedly.  Until he starting whipping me with chains and trash cans that is.  That's just part of co-op, though, and can be half the fun on its own.  All in all, the game is absolutely worth the $5, and if you have a few hours and a friend around, you could do a whole lot worse than River City Ransom!