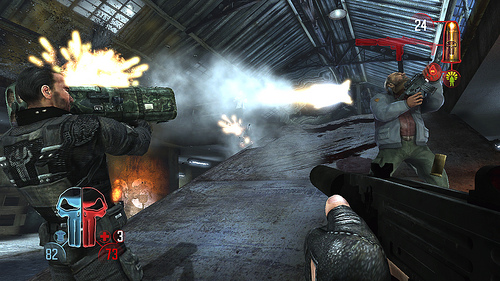 Frank Castle is pissed.  You see, we somehow managed to miss the fact that Punisher: No Mercy was released last week for $10 on the PlayStation Network.  I tried to apologize to Frank, I didn't know the game supported a 2 player online cooperative mode.  He didn't care, so he shot me in the knee.

I begged and pleaded, I told him that I'd give his game a fair shot.  I said it was only just now that I heard about the game's famous villains, like Jigsaw.  I only just found out about it's comic book style violence and its wide array of weapons.

I told him that I'd be willing to help him out, willing to grab a gun and put on the skull and deal out some punishment.  He said  "Punisher fights alone, he needs no one. "

That doesn't sound very co-op to me.  Thankfully his game disagrees.