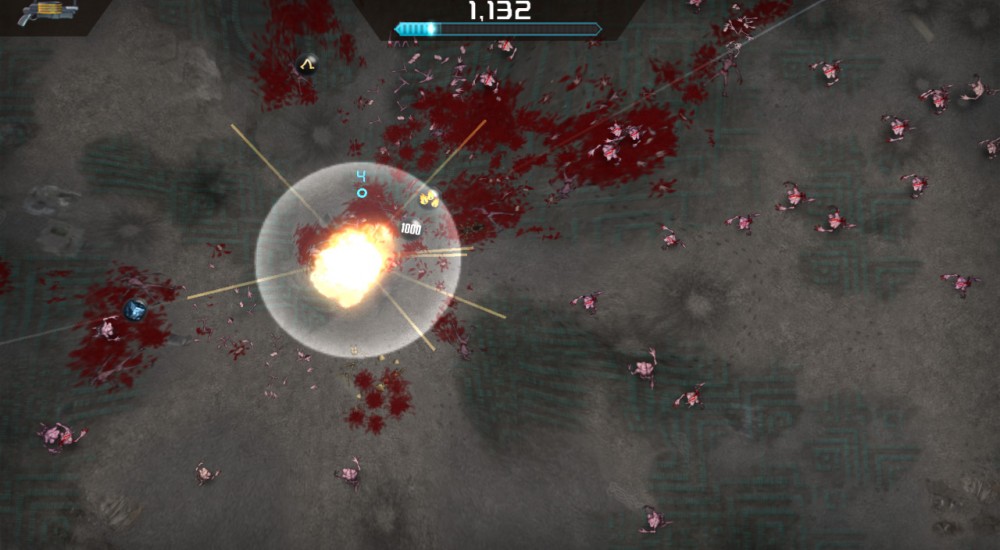 Last year we noted that Crimsonland, a two-player co-op twin-stick shooter which debuted back on the PC in 2003 had just arrived on the PS4. Now, on October 14th, in the year 2015, those who have exclusively limited video games to their Xbox Ones can enjoy Crimsonland as well for the low price of $13.99. I mean, not that money matters anymore. We are so deep into "the future" the sun is due to extinguish and cast humanity into the dark abyss of a dead star at any moment.

Until our cold, inevitable end, you and your co-op partners of choice can team up and blast aliens out in arenas with a few changes from the original game. Much like the PS4 port, the visuals have been enhanced to keep up with our shockingly dystopian, high-tech future, and the amount of players has increased from two to four. The core of the game remains the same, running around the world collecting power ups and weapons while wasting anything that looks like it might be chock full of blood.

Maybe 10ton just have a trillion other things to do than port their twin-stick shooter. Maybe they're time travelers who have no point of reference as far as this whole "linear line where things change" goes. Regardless of the rationale for keeping this little title in stasis for so long, it's cool to see a such a classic style of game showcased on the Xbox One.