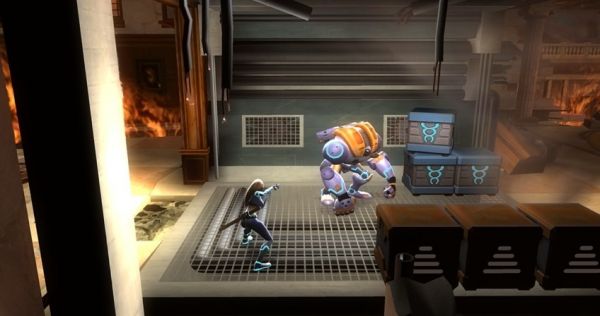 Are you ready for a wild co-op time on the Wii, because the Spyborgs are! Armed with 3 cybernetic enhanced characters, Spyborgs gives us a Bionic-commando-esque game exclusively to the Wii. Each of these three characters is dynamically different; from the hulking robot "Bouncer," to the female ninja "Clandestine," to the guy we know nothing about, "Stinger." Joystiq went hands on with Spyborgs to deliver the goods on this Wii game. Is it worth checking out for a bit of couch co-op?

When you're prancing around with cybernetic enhancements, some of that power might go to your head. That happened to a former squad-mate of these three heroes. As this character goes rogue, it's up to the remaining three Spyborgs to stop the evil plot to take over the world! The design team for Spyborgs has their share of hit games including Ratchet and Clank, and Call of Duty, so we're expecting some great things from them.

Playing Spyborgs seems easy enough. Move with the nunchuck, jump with A, attack with B and C, block with Z. But wait, there's (optionally) more! If you're feeling ambitious when the Wii waggle prompts show up on screen, you can deliver devestating finishing attacks by following their directions. Co-op gives you an added bonus with these finishing moves, since the characters have to complete the cycle of prompts together for an amazing dual-attack full of win!

Joystiq even encourages the art of Co-op here, with this simple paragraph.

"Spyborgs can be played in single player, with players able to zap back and forth between characters. However, you'll have much more fun playing it co-op with a buddy. The Spyborgs team has done a great job of building a lot of moments to unleash co-op attacks. It is easy to miss the prompt to join a co-op attack, though. The screen can be filled with an overwhelming number of enemies, so it's best for players to communicate when playing the game. Another nice touch for the co-op mode: if your health is full, any health orbs you collect will transfer to your friend. Nice touch when you're playing with an item-hog."

Yea, we're sold. Check out the trailer, it's full of interesting gameplay and a hint of what the games humor has in store for us. Spyborgs is available in North America September 29th, exclusively on the wii!