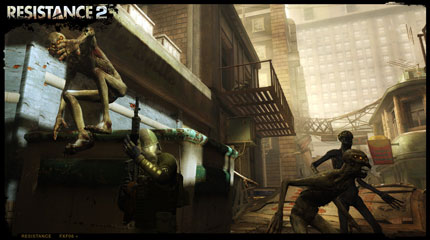 Eurogamer recently held a Live Q&A with Insomniac Studio's Director Ted Price in regards to the upcoming Playstation 3 exclusive shooter Resistance 2.  By now you've heard about the amazingly promising 8-player co-op mode in the game, but what we haven't heard was any details on this - only that it would be a class based system.

In the Q&A we learn that the co-op campaign will "flesh out the world with its separate story" and be lighter with no big movies.  I think that's a perfectly reasonable use for co-op, to add to an already engaging single player experience.  In fact, that's almost like getting two games for the price of one.

Another interesting co-op tidbit learned is players won't be confined to the same area as other players.  That is, if one player would like to wonder off on their own to meet a timely demise - they are perfectly able to do this.  In other words, the game isn't going to force people to stick together.  This can help bring some new and interesting tactics to the co-op aspect of the game, and from what we hear the co-op campaign is incredibly difficult and team work will be essential.

We'll keep a close eye on more Resistance 2 details as the become available, and we'll be eagerly awaiting 8-player co-op this fall on the Playstation 3.