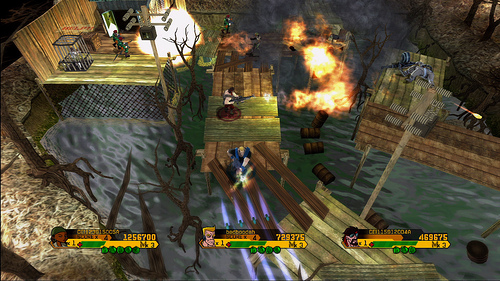 In a mere 24 hours, give or take, Wolf of the Battlefield: Commando 3 will be released on Xbox Live Arcade (the Playstation Network version came out last week).  We previewed the game last week here at Co-Optimus.  Team up with up to three other friends, either locally or online, to blow stuff up and save the world from the bad guys.  It looks to be a fun little game, if you are into that sort of thing (which we know you are, being a reader of this site, after all).

Piggybacked onto the XBLA purchase of the game is an interesting bonus.  Players will be able to help test the highly anticipated Super Street Fighter II Turbo HD Remix later this month.  It's not co-op, but it might make you take the plunge and get the game, so it deserves mentioning.  Likely, many will get Wolf of the Battlefield: Commando 3 for the beta of SSS2THDR (whew!), but the co-op shooter looks to be worthwhile on its own.  A bit like Crackdown and the Halo 3 beta, perhaps?