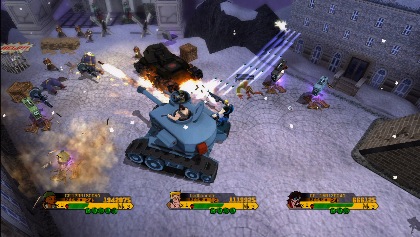 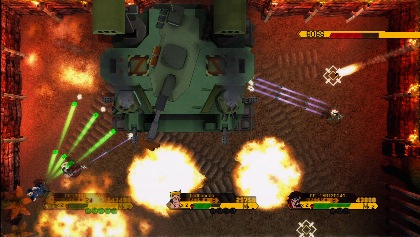 I'll be honest, I don't recall much of the previous two Commando games.  But immediately after Wolf of the Battlefield: Commando 3 was announced with it's 3 player co-op gameplay I knew the latest game was one I had to check out.  Wolf of the Battlefield isn't necessarily a bad game, but it's not a good one either.  I can't quite place my finger on what it is, it's almost like the game is missing something simple. WotBC3 plays a bit like Total Carnage, the classic sequel to Smash T.V. from the arcades.  It's a top down dual analog shooter in which you and your buddies take on swarms of seemingly endless bad guys in a gritty war enviornment.  The graphics are crisp and cartoonish with colorful anime style overlays for your special attacks and cut scenes.  You'll find yourself trouncing through 5 levels of gameplay, with the total game length not much longer than 30 to 35 minutes.  It is a bit short, but there are 4 difficulty levels to play through and a few secret areas to uncover.  There's not much here in the way of weapons, you have your standard machine gun, some blue/green glowy gun, rockets, and a flame thrower.   Each weapon can be upgraded 3 times for increasing damage and firing rate.  There are vehicles in the game, but they are few and far between; and even though you can get all 3 of your guys in each vehicle, I found the vehicle controls clunky.  Scoring is based on an ever increasing combo system, with multipliers up to 24x.  You'll lose your combo if you take a hit, so obviously you'll want to avoid that. 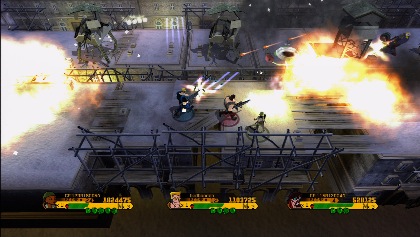 The specifics of Co-Op play force players to work together in a few ways, namely by covering each others asses and making sure each player gets their share of weapon upgrades.  There's a continuous stream of spawning bad guys behind you, saw it's much easier if one player is designated as the cover man to watch for these cheap kills.  It is a nice change of pace to have 3 co-op players, each one with their own strengths and weaknesses.  Of course you have the small yet agile female character, the big, brutish tank male character, and your Johnny go lucky all around average guy that's balanced.  Each one has their own "M Attack" which I think stands for massive, or multiple, or mulberry - either way it unleashes an impressive wave of destruction against multiple bad guys. All in all Wolf of the Battlefield: Commando 3 (ok, seriously? Shorten the name) is a decent game that just lacks inspiration.  There's nothing incredibly wrong with the game, but in an age where our virtual arcades are becoming crowded with similar titles - WotBC3 does nothing to stand above the rest.  It's hard to justify the $10, unless of course you snag it on Xbox Live Arcade, then you'll get into Street Fighter II: HD Remix Beta.

The Co-Op Experience: Co-Op Experience: Up to 3 players can play together with special "co-op" vehicles available as well as scalable difficulties based on the number of players. General Ratiev, evil leader of the Zalestad nation must be stopped. At the player�s disposal is a huge arsenal of weaponry, controllable vehicles and a rag-tag group of specialized soldiers, each with their own unique characteristics. The Wolf of the Battlefield: Commando 3 soundtrack is being created by Norihiko Hibino, an international composer well-known for his work creating music for the Metal Gear series of games. With a comprehensive scoring system and online leaderboards, players can see how they compare to the best digital soldiers in the world! [CAPCOM]