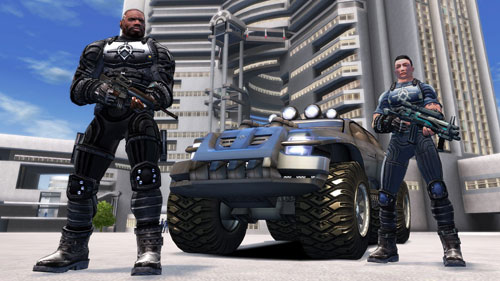 Crackdown means a number of things to a number of different people. To me, it means super-hero physics in an open gang war. Matrix-style jumping across rooftops can get especially interesting if you add a little co-op to the mix. Hand to hand combat with a physically enhanced "agent" can add a little spice to your life, too.

While playing Crackdown, you will build up a number of skills depending on what you do. If you drive through gates in “races” you become a better driver. If you shoot foo's in the dome you earn accuracy with firearms. For our immediate purposes, if you walk into a gun fight with only your fists to protect you, proficiency (or strength) in melee is your reward.

As I moved through the game shooting people in the true GTA style - cops, bystanders and thugs being fair game, I decided I need to mix things up a bit. So, my solution was to start punching and kicking everything that moved. Before long, I had a killer melee skill that launched my opponents across the screen with one powerful kick. Unfortunately in co-op, this skill does not discriminate between ally or foe. I was doomed to send my co-op partner flying on a number of occasions, sometimes clear across the screen, with one innocent push of a button.

Eventually we were passing the boot-to-the-head back and forth as we developed our mad kicking skills cooperatively through waves of bad-guys. What we didn't know, was how horrible things could get if you stood in your buddies way while jumping occurred. I wouldn't mess with this guy if I were you...

One of my favorite past times with Crackdown is scaling buildings to pick up jump orbs – the shiny green things that build up your jumping skill to eventually be able to virtually fly. So, my co-op buddy would find an orb, and I would obediently follow to the location or vice-versa. We'd get in each others ways from time to time while trying to reach the same narrow ledge, but it wasn't until that melee skill was really high that it became a real issue.

At the lighthouse in the Los Muertos territory, we were having a hard time getting to some higher windows. The solution: use our buddy as a platform to the next area. Hey, it worked in Mercenaries 2 - and half the other open-world games out there.

So my buddy stood still under the nearest ledge while I mentally calculated my jump trajectory just right. Jump, land, and jump again to gain my extra few-inches boost. Unfortunately at the “land” part of that, my buddy crumpled under my mad melee skill, and was launched way out toward the ocean with no respite of building to break his fall.

Me: "Holy shit, did that just happen? Where are you?"
Arttemis: "I think you broke my guy...I'm in the rocks somewhere!"
Me: "oh man, I'm sorry! I didn't expect that – lets find some orbs around where you are..."

So, I leap toward my crumpled broken co-op buddy to do it all over again, and again, and again. This is really amusing if you are having a relaxed time with the game, but can get extremely frustrating if you're trying to get anything done. It is recommended that you split up a bit to clear out enemy hideouts efficiently without stepping on each others toes – or faces. The moral of the story: Don't take Crackdown too seriously, or you'll never have fun.