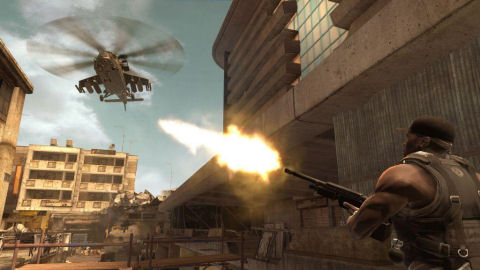 As we've detailed, there is a new 50 Cent game, called 50 Cent: Blood on the Sand, which features drop-in, drop-out co-op. Now, before you groan about another celebrity game churned out to get some cash, this game might be different. By listening to some quotes from TeamXbox's news post, you can get an idea of how this game might not be that bad.

Complimentary quotes after the break.

50 has told MTV News that he has high hopes, and the people around him seem to be rallying. Blean mentioned that Tony Yayo, who is one of three G-Unit members who fight at 50's side in the game, recently remarked that "Blood on the Sand" is "looking as good as 'Gears of War.' "

This is not the first time some someone praises the game. Epic Games' Vice President Mark Rein told CVG he was blown away when he got a chance to see the game.

"It's fantastic. I was blown away and I said to them, 'wow, you've got a really great team there.'"

So, hit up the site for some info and screenshots about a game that might just get out of the "crappy celebrity/movie" well that games like it tend to reside. I mean, it worked for the Spiderman 2 game, and the epic Chronicles of Riddick: Escape from Butcher Bay.