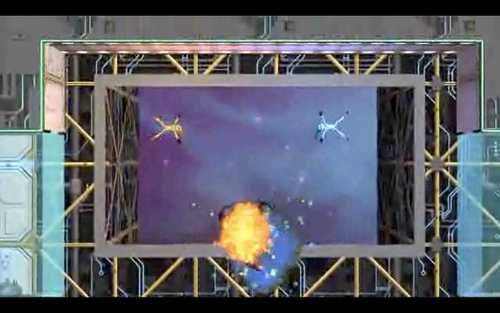 If you're fixing for some Splodin, you might notice a title update when `Splosion Man fires up.  Great you're thinking, finally the avatar awards and fixed lag issues are taken care of.  Sorry, no awards here, no lag fix to see.  Instead the update fixes a leaderboard exploit and clears off some cheaters who abused it to get obscene high scores.  This might be why your co-op score pales in comparison to quite a few people out there.

The leaderboard clearing application, called Splodenet, is quite an amazing piece of software.  Just take what its designer had to say.

“It goes on-line August 31st, 2009.  Human decisions are removed from leaderboard defense.  Splodenet begins to learn at a geometric rate.  It becomes self-aware at 2:14 a.m. Pacific Time, September 1st.  There is no score but what we earn for ourselves.”

All of this is in preparation for the single player score tournament which kicks off on September 6th and runs through the 12th.  The winners will earn themselves a Splosion Man statue autographed by the development team.

But don't worry, even if you suck at Splodin you can still get one sans signatures.  How?  Just hit up PAX.  Our good friend Scott Benton over at CoG has discovered what TwistedPixel goodies will be for sale at the show.   Here's the scoop: