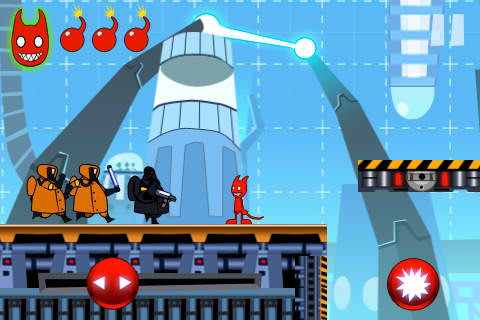 What the hell are you?  'Splosion Man's cat?

Twisted Pixel CEO Michael Wilford has said that they aren't going to sue Capcom for 'borrowing' the four player co-op-tastic 'Splosion Man concept.  Yesterday, we brought you the story about Mount Twitter erupting over the release of MaXplosion, a mobile game published by Capcom.  As the husband of an attorney I feel it is my duty to comment on other people's legal decisions whether they want me to or not.  I say good for you, Twisted Pixel. Court is boring as hell.

We're definitely not going to pursue legal action. While I think the similarities are pretty nauseating, we're too small to take on a company like Capcom. That, and we owe them one for inventing Mega Man, so we'll let them slide. I just hope they're not counting on the fact that indies can't fight back.

I believe Capcom would respond like this: "That's exactly what we are counting on.  Now were are going to go kick puppies while making crude remarks about your mothers, all while playing Lost Planet 2, the best game of all time.  Please buy it."*

Wilford went on to say:

In general, anything that would take our focus off of making games would be a bad decision, I think. We just need to keep our heads down making the next thing so that Capcom has something to steal next year. But I have to say, the amount of support we've seen in the last 12 hours on Twitter and over email has been awesome, and I think that's better than wining [sic] a stupid lawsuit or anything like that.

Once again, I'm just speculating, but I think Capcom responded to this by saying, "Yeah, thanks for the crap- ton of free advertising we got from the media ruckus.  We were expecting to sell 10 copies of MaXplosion. That's five times the amount of Lost Planet 2's sales.  Now we expect to sell eleventy-billion copies.  That's one per iPhone.  Gamers don't care about you or you're stupid 'explosive man.'"*

We'll just have to make our own mobile game and I'm hopeful that Capcom will see that robbing our shit wasn't worth it in the long run. We'll let you know when we have something on the mobile front to talk about, but now we have added incentive!

I believe that Capcom then responded with "Mwahahahahahahahahahahahaha," and then triggered a trap door, dropping a random indie development team into a molten pool of Lost Planet 2 discs.*

'MaXplosion' was developed independently by Capcom Mobile. Nonetheless, we are saddened by this situation and hope to rebuild the trust of our fans and friends in the gaming community.

Anyone else notice that this statement doesn't really address the fact that they outright stole this game?Twisted Pixel responded minutes ago with this re-tweet: