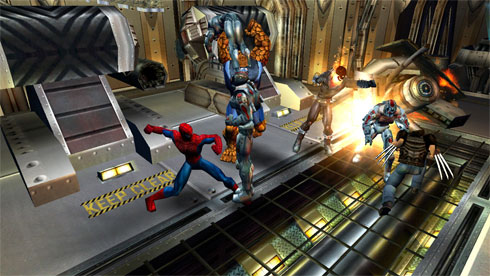 Marvel: Ultimate Alliance is one of the best co-op experiences of this generation, in my humble opinion.  The combination of action RPG gameplay and spandex-clad superhumans makes for a whole lot of over the top fun.  A sequel was announced recently, and it is set to arrive later this year.  A few details about the sequel have been revealed, and though there isn't too much information, it still is worth looking at.

We already knew it was coming, but amongst yesterday's MS/Acti marketing leaks were some further details on the upcoming Marvel: Ultimate Alliance II. The game will be set during Marvel's recent "Civil War" story arc, with players forced to choose sides in the conflict. There'll supposedly be "over 20" playable Marvel characters, including the Hulk, Wolverine, Spider-Man, Venom and the Human Torch, and players will be able to "fuse" two character's powers together to give one character hybrid abilities. The release mentions the game will be appearing on 360, PS3, PS2, Wii, PSP & DS.

The Civil War storyline was quite controversial amongst the comic geek community, but it will be a natural fit for a video game.  Fusing characters sounds odd, but the prospects will fill our daydreams for quite some time.  The Iron Surfer sounds like a winner to me!