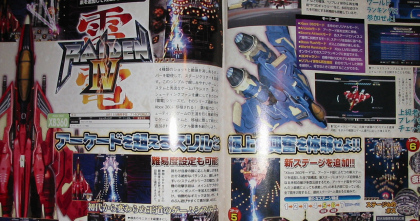 The Raiden series, particularly Raiden II is the pinnacle of co-op SHMUPs (perhaps next to Ikaruga).  So there's good news that we finally have confirmation that the arcade version of Raiden IV will make it's way to Xbox 360 consoles complete with two new stages and Xbox Live play!

For the truly hardcore the developers of the title have also included the ability to save and share replays as well as support "swivel" LCDs.  What does that mean?  If you turn your 16:9 LCD on it's side so it stands upright you can play the elongated game that way with no sidebars.

Unfortunately there's no word of an American release, but Japanese gamers can get their hands on the latest Raiden game on September 11th.