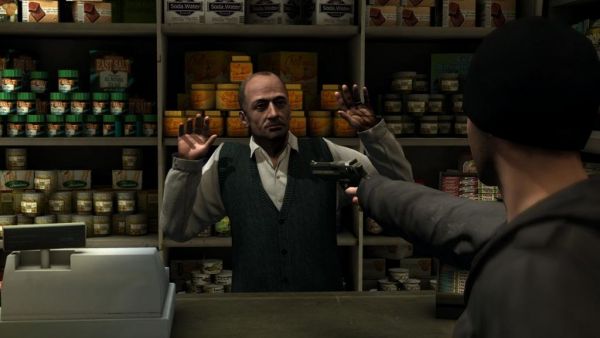 The final game I got to play for PAX 2009 was Quantic Dream's upcoming adventure game called Heavy Rain for the PlayStation 3.  More of an interactive movie than a game, players will take the role of ordinary people placed in extraordinary situations.  The standout feature of the game is not only the incredible graphics, but the multiple paths of solving a situation.

As I sat and watched a few people ahead of me play the five minute demo, I noticed that while everyone started exactly the same, there were several points in which the actions branched out and eventually solved the scene in different ways.  The current scene had your character, Scott Shelby, investigating a murder, trying to ask questions of a convenience store clerk.  When the clerk is reluctant to answer, you suddenly find yourself in the middle of a armed robbery.

What do you do?

There's a few options right from the get go.  Your character is in the back of the store when the robbery occurs, and it's assumed the robber doesn't know of your presence.  The game splits the screen into comic book style panels showing all views.  The only problem I had with the game was at this moment, as player movement is bound to the right trigger and is pressure sensitive.  The lighter you press it the slower you walk - sounds great and it works fine as long as you need to go in a straight line.  Turning on the other hand just felt like a constant battle with the controller.  Imagine steering a stubborn donkey down a grocery store  isle, that's the best way to describe it.

At t this point you are able to sneak down certain isles, with various traps in front of you.  One isle had some chips on the floor that alerts the robber when you crunch on them, another has a glass bottle you can grab to use to bring him down.  If you aren't fast enough to grab it, you'll drop it and alert him, something everyone including myself did.   Eventually you'll get into a conversation with him and, once again, there's a few options.

You can work on trying to talk him down, calming him, and getting him to leave calmly.  You can also keep him distracted as you slowly work towards him, eventually tackling him.  It's very tense as you watch your character slowly tip-toe towards him in one pane, as you choose conversation topics in another.  There's that thought in your mind the whole time that you are just pushing your luck, and he's gonna pull the trigger - ending your game and ending Scott's life.

And that is the one really amazing thing about the game, it's the ability to really suck you into the situation.  The camera angles, the graphics, and even the audio on the noisy show floor all worked really well together.

Ordinary people in an extraordinary situation may sound cliche'd, but from the short demo it works.  If Quantic Dream is able to weave stories and scenes as interesting as this throughout the whole game, I think gamers are in for a real treat.