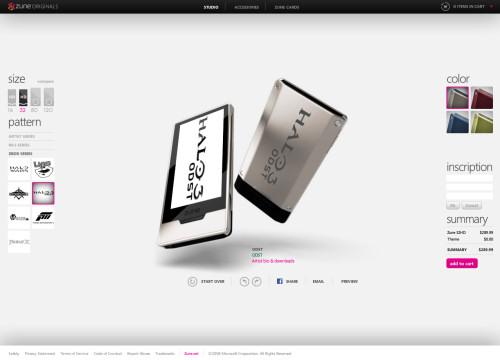 Microsoft launched their latest social media player yesterday with the ZuneHD.  In 16GB and 32GB varieties, the system packs an OLED multi-touch screen, accelerometer, HD Radio as well as sleek design.  Soon the system will be sync'd up to your Xbox 360 for a host of other features.

Right now the ZuneHD store is offering custom versions of the player engraved with some great co-op game graphics like Halo 3: ODST, Fable II, Crackdown 2, Gears of War 2, Lips and Halo Wars.  The engraving is free, and it'll come with a unique wallpaper for the device as well.

Despite the device launching yesterday, we're only now hearing about it's promised gaming capabilities.  Available from the Zune store are a handful of games like Project Gotham Racing: Ferrari Edition and Audio Surf Tilt.  There's a handful of applications available as well like Twitter, Weather and others.

That's all well and good, but a handful of apps aren't going to compete with Apple's iPod.  Microsoft has a plan for that as well, and it comes in the form of the latest update to their XNA Toolkit.  The toolkit is already being used to develop Zune and Xbox Live Indie games, but now supports Zune HD functionality as well.  There's still no word on how exactly developers will get their applications to the Zune store, but we imagine the process will be similar to the existing Xbox Live Indie Game channel.

Now we just need someone to make a co-op ZuneHD game.