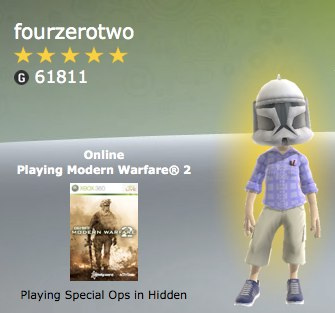 Perhaps leaked isn't the right word, but some folks watching Infinity Ward community manager Robert Bowling's Xbox Live activity have noticed the names for 20 of the 23 Spec Ops missions in Modern Warfare 2.  Spec Ops is the two player local and online co-op mode in the game.

The names don't give too much away, though missions like Time Trial, Snatch and Grab, and Sniper Fi sound interesting and give a hint as to the objective at hand.  It's pretty crazy that a full month before release the retail version of the game is available to certain individuals.  To play the game with achievements on Xbox Live requires the final certified build of the game.