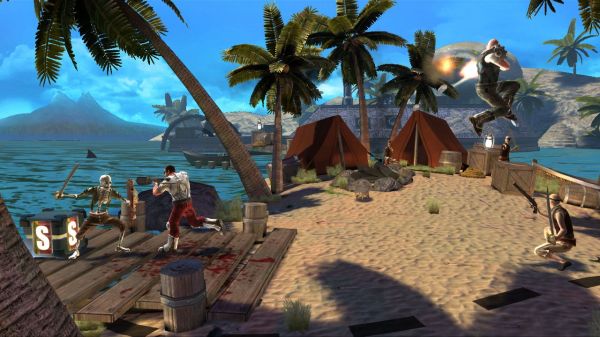 Some more details are trickling in of Vicious Cycle's upcoming side scroller called Matt Hazard: Blood Bath and Beyond.  The tongue-in-cheek game will support two player local co-op on both the Xbox Live Arcade and PlayStation Network.  Players assume the role of either Matt Hazard or his sidekick Dexter Dare as they work through familiar looking video game scenarios like Bioshock, Mirror's Edge and Mario Bros.

The game contains an insanely wacky plot that involves programmers, old video games and transgender pirates.  But really the gamme is all about blowing the crap out of everything that moves in a style that's similar to the Contra, but plays a bit more like the recent Shadow Complex.

The folks at 1UP got some hands on time with the game and boasted that the ridiculously over sized boss battles were a blast, the enemies were interesting, and the game play scratched that Contra itch.

It looks like Matt Hazard: Blood Bath and Beyond is shaping up to be a solid addition to the side scrolling co-op shooter.  We're a bit disappointed to see the lack of online co-op, but we'll take what we can get when we can blow up transgender pirates with a friend.