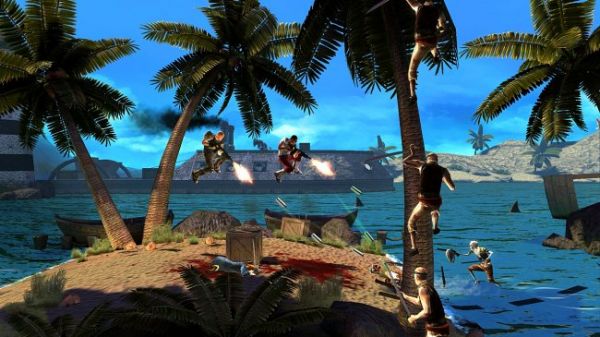 According to Joystiq, we have a date for the upcoming two player co-op, side scrolling, comedic shooter; Matt Hazard: Blood Bath and Beyond.  The game is set to release on January 6th on the Xbox Live Arcade and January 7th on the PlayStation Network.

Gamezone recently sat down with a member of the game's development team, and got the skinny on the latest installment of Hazard's adventures.  The interview is a bit...awkward, as the questions are answered as if there's a long and remembered past for Matt and his games.  Of course, the question of co-op came up.

Two-dimensional shooters make great co-op games. (Hint, hint.) Will there be any such feature?

TR: Why yes, there is co-op game play. And none of that fancy online stuff … it’s strictly couch co-op (or two chair co-op). We want the player to be able to reach over and slug their partner whenever they need to… such as when their partner sucks so bad he or she has to steal a life in order to continue playing the level. Of course, we do have leader boards so bragging rights can be tracked online. We’re not luddites.

The lack of online play is disappointing, but it was something we've known about for some time.  The interview goes on to describe the game as a 9-bit title, since it's on XBLA and PSN, thought it takes a lot of queues from 8-bit games.  What kind of queues?  Static cut scenes with textual story progression - which apparently - has something to do with co-op.

Then again, we’re hoping the peer pressure of cooperative multiplayer will make players think twice before just jumping into a level without reading the text first.

While one player will control the badass Matt Hazard, the other will be controlling Dexter Dare.  Dexter's career is a long and troubled one, plagued by drug and mana abuse because of Matt's spotlight.  Eventually Dexter tried to destroy Matt, but somehow, someway, they are teamed up again.

Dexter got his start in one of Matt Hazard’s games in the mid-90s (Matt Hazard Must Die!) as a character who saved Matt from certain doom. He was so popular that Marathon Software made him Matt’s permanent sidekick in the Matt and Dexter series of platforming shooters.

Although initially grateful for the opportunity to share the spotlight with a gaming legend like Matt, Dexter soon began to harbor a great deal of resentment toward his mentor. He also developed a crush on Matt’s then-girlfriend, Kitty Abundanza, and resented Matt all the more for being so successful with the ladies.

All of this led a to a Mana abuse problem that ended the partnership and put his career on the rocks. He disappeared from the gaming scene and retired to his palatial virtual estate, where he assuaged his loneliness by building an army of female robots, all of whom were modeled to look like Kitty. (Despite his many difficulties, Dexter was always quite good with money.)

Dexter spent years blaming Matt for all of his personal problems and knowing deep inside that he, Dexter, could surpass Matt as the best action hero in games if given the chance. So, when Wally Wellesley offered him a starring role in a next-gen action title in exchange for destroying Matt, he jumped at the opportunity to exact revenge and become the hero he always wanted to be.

Matt Hazard: Blood Bath and Beyond looks to be shaping up to be a fun and goofy side scroller that's stock full cooperative goodness and blood.  Lots and lots of blood.