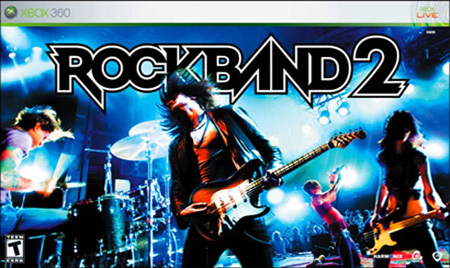 There's going to be nothing better than getting the band back together when Rock Band 2 hits this September for the Xbox 360.  You and three buddies wailing away on plastic instruments and singing songs the way only mama could love.  Recently ScoreHero picked up on a partial setlist from the game, thanks to some clever G4TV footage of Rock Band 2.  That list is highlighted by the likes of the Red Hot Chili Peppers and "Give it Away Now" and the Foo Fighters with "Everlong."

As if all those weren't awesome enough, Kotaku managed to snag another group of songs that were leaked out before being pulled thanks to some fancy NDAs.  That list is highlighted by the likes of Rage Against the Machine and "Testify" and Nirvana with "Drain You" (which is arguably my favorite Nirvana song ever).  Though with the latter song, this should be available on Rock Band 1 via DLC when Harmonix/MTV release the entire Nevermind alblum from Nirvana.

Other highlighted bands include Alice in Chains, Cheap Trick, and Jethro Tull.  Both of the leaked lists of songs are posted after the jump.  And I must say, it's a nice day for a White Wedding...