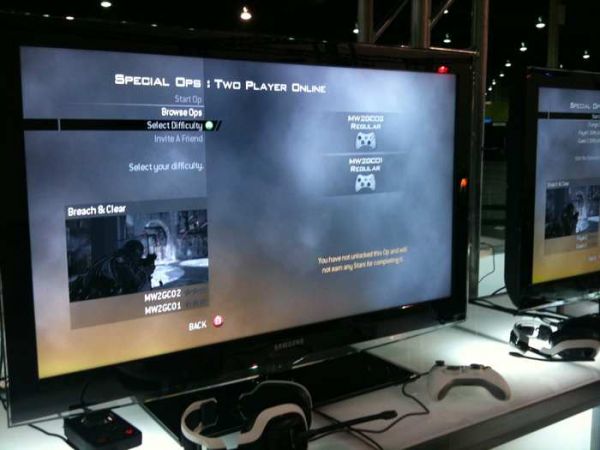 When we found out that Halo 3: ODST's Firefight mode didn't support matchmaking, we were quite bummed to say the least.  If you haven't fired up Modern Warfare 2's  Spec-Ops cooperative mode yet on the 360 or PS3, we've got a bit of a downer for you - there's no matchmaking.

Bungie had an excuse for not including it, stating it was an engine limitation, an excuse we don't accept by the way.  Infinity Ward on the other hand hasn't stated why there's no matchmaking in this mode.

If there's a plus side, it shouldn't be too hard to find a friend online who wants to play with you - especially right now at the game's peak.  But six or nine months down the line, when you finally want to finish out a few of those missions on Veteran you may be SOL.

If you do need someone to co-op with on the 360, look no further than our Co-Op Night for the game, which takes place tonight!  Hit up that thread, leave a comment with your Gamertag and join in on the fun.

PlayStation 3 owners can hit up this thread and leave their PSN ID to meet up with other gamers for Spec-Ops.  PC users can join our Steam Group to find other co-op gamers.

We can only hope that Infinity Ward patches in matchmaking in the future, it'll help with the longevity of the co-op mode.  That is, as long as it isn't an engine limitation.