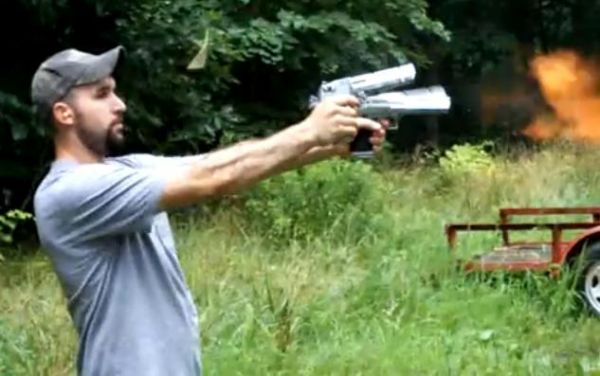 Infinity Ward showed off the two-player co-op Special Ops mode from Call of Duty: Modern Warfare 2 at GamesCom, and G4TV got to watch. Unfortunately, the developer who ran the demo chose to do so with AI instead of another player. Um...okay?

In another part of the country, Community Manager Robert Bowling pandered to a crowd of GameCrazy store managers, and in the process of a single-player demo stumbled upon dual-wieldable Desert Eagle pistols. The sharp-eyed managers noticed the icon and insisted that he pick them up in-game, thereby accidentally revealing a new aspect: double-fisting handguns (and possibly more). Bowling called it "Akimbo", and let loose some more teases on the Infinity Ward forums, which we've captured here.

Akimbo is NOT the perk in the new MP trailer this week.

I was presenting a singleplayer mission at the GameCrazy show this morning on stage and happened to walk over a body that had Akimbo (dual wield side arm), therefore the icon for the weapon popped up on screen and the room went crazy with chants demanding I pick it up and use it.

Happened to be dual Deagles. Now to calm some initial fears of "OMG! Overpowered!". Akimbo is limited and balanced, just like EVERYTHING in the game. It's limited to sidearms, harder to aim than standard and you can't go ADS (aim down sights) since you have a weapon in each hand; Among other balancing techniques, so don't freak out before you see it in action.

In response to negative feedback about the usefulness -- or lack thereof:

Options. Variety in playstyle. Customizing your load out to how YOU like to play.

I personally, never use Akimbo. Just not my style. I like to focus my class on being fast and silent.

The fun of multiplayer is that you're constantly experiencing something new, and every has their own playstyle. It's only limited (as in you won't see it often) because of the amount of options we have in the game. Everyone will have their own preferences therefore you shouldn't see a lot of anything ALL THE TIME.

With so many new killstreaks, weapons, perks, attachments, and other ways to customize your class, you have a lot of new depth you can go into when catering to your playstyle.

Don't assume Akimbo is all about being solely "dual-deagle". It's useable with all Sidearms, some much more useful with Akimbo than deagles. We've greatly expanded every category of weapons, so your "side arm" category is much more than what you're use to in COD4.

Trust me, Akimbo is a useful addition with certain weapons. Some side arms are just fun to use Akimbo with. "Why put it in if only a small niche will use it?" is a bad way to go about game design. Yes, you have to make priority, but if we only put in stuff we thought EVERYONE would use daily, then a lot of cool features would never make it in. Like Dead Silence Perk in COD4. Some say useless, some live by it in Hardcore S&D.

In response to "sidearm" discussions:

Side arm does not equal Pistol.

We've expanded every category quite a bit. That doesn't mean SMGs are now Sidearms, but it does mean we have more than just pistols as side arms. What else is included in the Sidearm category will have to remain a mystery for now.

I appreciate the feedback guys. We're all part of the same community, but won't always share the same opinion. That's a GOOD THING, because it means we can constantly be getting multiple point of views to help shape the final game.

In all honesty, the initial reaction to "dual wielding" is shocking. It's not something you expect and is completely new to the game. However, the designers have done an amazing job in how they implemented it.

I can also completely appreciate the realism argument. Sometimes we make that decision of realism for balancing (i.e. AT4 locking on to airborne killstreaks) and sometimes to add a variety of fun gameplay mechanics, which is the case with Akimbo.

I promise you though, we're not going sci-fi or completely changing what Modern Warfare is all about. It's still about the fast paced, infantry focused combat that we all love. We don't have jetpacks and shields. Once you play the game with all the new perks, attachments, weapons, killstreaks, features, gear, and other surprises it all comes together perfectly.

I plan to back that up with plenty of MP videos and details as we get closer to launch, the latest one coming out this week so you're up to speed on what to expect on November 10th.

So there you have it. An interesting addition to the Modern Warfare line. There's no indication if this perk will make it into Special Ops, but if you put the info together, it's available for single player and multiplayer modes.

Hopefully Perks like this will make their way into Special Ops, if Mr. Bowling's reasoning truly applies: "Options. Variety in playstyle. Customizing your load out to how YOU like to play."