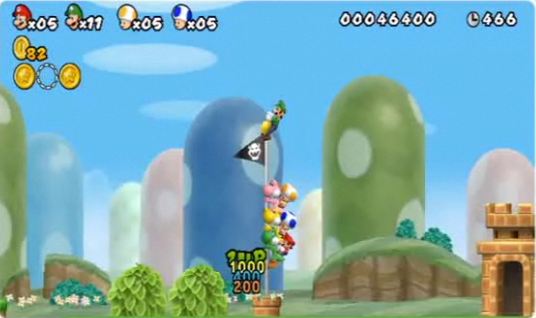 Out today in North America is the New Super Mario Bros Wii for the..uh...Wii.  The four player co-op title is a game true to its roots, providing side scrolling platforming set in the Mushroom Kingdom.  We played the game at PAX this year and enjoyed it quite a bit, but I have to say, after watching the video posted below it's now on the must buy list.

The video shows four players co-oping through a level, passing Luigi around like a drunk college freshman at a frat party.  Luigi doesn't do a single thing the entire level except reap the rewards of his team; collecting coins and 1UPs and finally sitting atop the flag pole.

If you haven't picked it up yet, you can snag it on Amazon for $47 with free shipping and $10 in videogame credit.