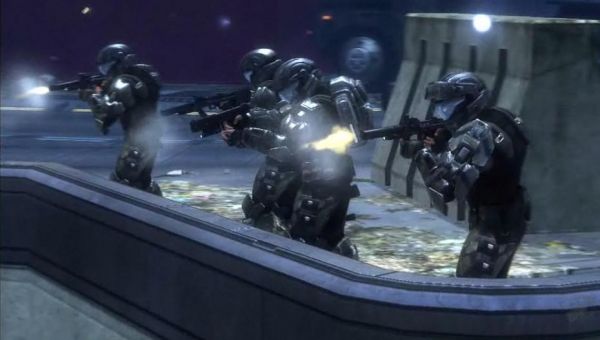 G4TV sat down with Bungie's Joseph Staten, Lars Bakken, Curtis Creamer, and Brian Jarrard to talk about Halo 3: ODST, and reflect back on the title.   A large part of the interview talks about the game's identity crisis, and how it changed over time from a mini-game to a full blown retail product.  The guys discuss how this hurt them in the reviews, but overall, didn't seem to affect sales at the end.

Joseph Staten:  We got criticized, fairly, for doing a poor job communicating what ODST was, an expansion pack or a full-fledged, AAA release. It definitely turned out to be the latter. But, unfortunately, we didn’t know how much great work we were going to pull-off when we first announced the game. It’s impossible to know, but my gut says that if we’d never said the words “expansion pack” we would have seen an appreciable increase in the review scores.

The game's Firefight mode came up quite often in the interview, and at one point, it was even described as the feature they are most proud of in the game.  Even the lack of matchmaking in Firefight was discussed, and it appears that is one thing they wish they could have added the most.

Criticisms around the lack of matchmaking for Firefight and mechanics to add more longevity and community activity to the core game were fair and is something we would’ve done differently it if were possible within the scope of project.
When we first started toying around with what became Firefight, we all knew we wanted to have Matchmaking for it. We also knew that would mean some pretty heavy investment on the networking side, which meant more people, and unfortunately it was quickly shot down. The  Halo 3 engine doesn't have support for Matchmaking in our synchronous networking model (which is what powers Campaign and Firefight), so we couldn't do it within the scope of this project. It still bums me out, but there are always things you can't do, and you just have to move on.

This was our biggest criticism with the game as well, and it's truly a shame that we'll never see matchmaking in ODST's Firefight mode.  That being said, it gives hope that the team realizes this shortcoming, and that we may see full matchmaking support in all co-op modes for Halo Reach.

Speaking of finding other co-op gamers, don't forget that this Friday is our Halo Waypoint night with a focus on the Legendary difficulty.