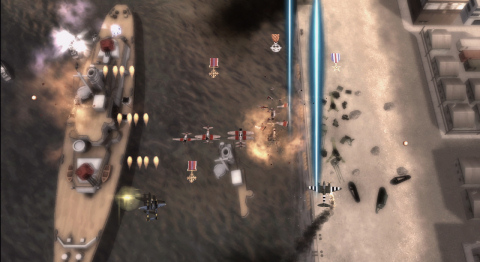 As a long time fan of the top down vertical shooters like Raiden II, Capcom's remake of their classic 1942 title for the Xbox Live Arcade and Playstation Network really caught my eye.  Titled 1942: Joint Strike, the game has a renewed focus on co-op play as well as adding some new enemies.  Of course the most obvious overhaul is a totally new 3D graphics engine while still maintaining a 2D shooter feel.   Finally, if you are a music lover, the game features a brand new score by Norihiko Hibino, an international composer well-known for his work creating music for the Metal Gear series.

1942J Joint Strike will support 2 player co-op, and will hit Xbox Live Arcade on July 23rd for 800 Microsoft points and the PlayStation Network on July 24th for $9.99.   To wet your appetite for the title we've posted five brand new screenshots after the jump.