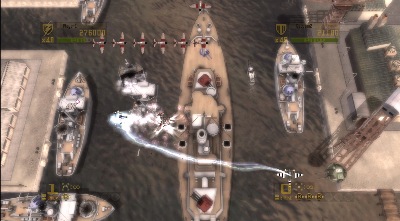 Growing up, I always looked forward to trips to Bruno's Pizza.  Not because they had some seriously bangin' pizza (which they did) but because they had a 1942 Arcade Machine.  1942 is a classic arcade title from Capcom, it's a traditional style top down shooter set in a World War 2 motif.  Capcom's latest remake, 1942: Joint Strike is a complete overhaul of the original game adding in 3d graphics, new enemies and co-op specific attacks.  The folks at Backbone Entertainment have done an amazing job with the game's look.  From the little 1940's style overlay filter that plays before and after the missions, to the small detailed battle that is taking place on the ground below; every nook and crannie of the game has been given the special graphical treatment.  The new co-op attacks (that's the "Joint Strike" portion) also add something unique to the game.  There are 3 different attacks that you can choose from.  The first of these are the lightning attack which when activated fuses a bolt of lightning between the players planes.  The second attack is a missile based one which launches a group of missiles in the middle area between the two planes.  The third is a tricky attack which actually bounces shots off your counterpart's plane.  The lightning attack definitley seems the most effective of the three. With three planes to choose from, each with their own strengths and weaknesses, as well as three joint strike attacks there's plenty of replayability here in co-op.  Plus there are four difficultly levels, though I'm not sure how much harder they make the gameplay - they seem to only change the amount of lives you start with.  The bottom line is if you love top down scrolling shooters, and you love playing them with friends, you are going to really enjoy 1942: Joint Strike.

The Co-Op Experience: Team up with a buddy to dogfight your way through an alternate WWII. Choose from one of three planes, and one of three co-op specific attacks.

The Co-Op Experience: Team up with your friend by choosing one of 3 ships with special co-op attacks.