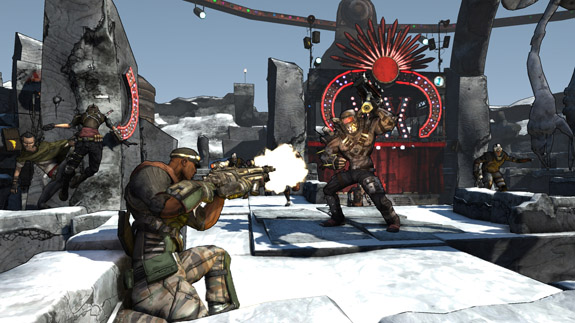 The recently announced Borderlands DLC called Mad Moxxi's Underdome Riot just got a whole lot more interesting, thanks to a recent quote from the content's designer, we know it's quite a bit more substantial than the arena quests we saw in the main game.

"This is totally different...basically the idea is that we have this character, Moxxi. She's running this underground coliseum tournament arena thing. The best thing you could compare it to is either Horde mode in 'Gears of War 2' or Firefight mode in 'ODST.' But even those don't quite sum it up.

The potential sounds interesting, sure.  But what exactly does the mode do that makes it so similar, or rather, defines itself to be listed with the two great survival modes of Gears of War 2 and Halo 3: ODST.

"It's all about this crazy Moxxi character, and she's running these tournaments. You go in and fight waves and rounds of monsters, and then she starts changing it all up. She throws out what are called 'Moxxi Maxims,' these rules that dramatically change the way the game play. She'll be like, 'Vampire Rule!' which makes it so that the player's health is constantly draining, but every time you get a kill you get a whole bunch of health back. Now all the players are like, 'Holy crap, I have to play amazingly aggressive,' so you have to charge in before you basically bleed out. Another example, she'll go 'Shotgun Challenge,' where all shotguns do bonus damage and all other guns take a penalty."

The more we learn about the Mad Moxxi DLC, the more it seems to be a worthy piece of content.  If either of the above quotes don't sell you on it, perhaps Gearbox's Randy Pitchford could do better with this:

This is an ENTIRELY NEW GAME MODE.
Think ODST's "Firefight" or Gears of War's "Horde Mode".
Cash, prizes and competition!
It's like Smash TV in coop FPS, but in the Borderlands.

I do believe he said the magic words, "Smash TV."

In other Borderlands news, the Xbox 360 version of the game has received a title update fixing quite a few bugs and character class tweaks.  Here's the official list.

- Characters that have lost skill points will have them returned the next time they are loaded - Most instances involving character data loss when playing online should no longer occur
- Item cards now display the intended five lines of text
- Achievements should now unlock properly. Players should automatically receive achievements that did not unlock correctly
- Fixed a progression issue in the Find Steele mission - characters affected by this issue should now be able to continue progressing
- Some issues involving external data manipulation of the backpack and character level have been addressed
- The auto-aim option should now fully disable auto-aim properly
- Fixed a bug that kept challenges and achievements from unlocking for the rest of a session after visiting arenas
- Fixed some formatting issues with the server list screen.
- Fixed an issue causing servers to report the incorrect plot mission.
- Proficiency progress to the next level should no longer be lost when leaving a multiplayer game as a client
- Lilith's "Silent Resolve" skill now works as intended
- Fixed a bug that allowed Mordecai to spawn multiple Bloodwings
- Mordecai's "Loaded" skill now increases mag capacity by 20%
- Roland's "Scattershot" skill has had its spread adjustment corrected, and damage now increases at +5 per level

The update should find it's way to the PS3 and PC shortly as well.