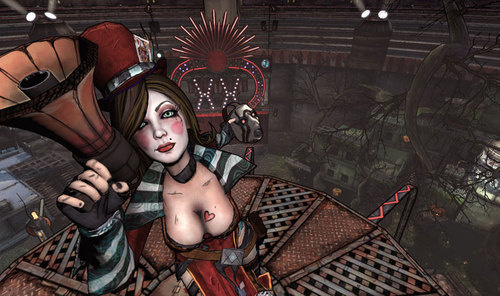 The second bit of Borderlands DLC has hit the four player co-op title, and instead of adding new story based missions, we're given something with a bit more replayability.  Mad Moxxi's Underdome Riot is part Smash TV, part Halo 3: ODST's Firefight, and all chaos.  It's cooperative arena based action with plenty of loot for a reward.

Moxxi's content is broken down into two separate pieces across three different arenas.  There's the short order arena battles which take around 30-45 minutes to complete, and there's the long order ones which take up to four hours.  I'll be honest - I don't have any interest in touching four hours of a Moxxi arena.  The biggest reason, along with time availability, is the only thing you gain from these arenas are weapons and items, and they aren't even guaranteed to be good.  No experience, no money, nothing.  That is, unless you are level 50.  Then completing those uber arenas will yield you a bonus skill point to upgrade your character even further.

So how does the game compare to Smash TV?  The presentation of the Underdome is set in a gameshow like environment - complete with music, crowd applause, and witty commentating from Moxxi.  It's amazing how much style and pizzazz is crammed into this content, the first time the music kicks in during a special wave you'll get all tingly and ready for battle...guaranteed. The mode definitely shares a lot with Firefight, as the rules are broken down into waves and rounds.  Each round has five waves of enemies to fight off, and each successive wave will get a random Moxxi Maxim.  Maxims are random things that mix the rules of the wave up.  A certain weapon may do more damage while others do less.  Enemies might have more health, players may bleed health, or various other curve balls to increase the difficulty.  As the rounds increase, the number of these in play will also increase.

The waves themselves also have themes like Horde, Gun, and Boss.  Horde waves will have psycho enemies charging you, gun waves will have enemies with bullets, and the boss wave - well that's one of the game's bosses coming out to kill you.  The bosses get announced in grand fashion, complete with spotlight and entrance music.  It's a grand affair, and normally a satisfying kill.

The Underdome almost requires cooperative play to survive, and while most of the rest of Borderlands can be completed solo, it'll be an incredibly tough challenge to do the same with Mad Moxxi.  Many times before starting a round we met in the new lobby and planned out strategies, equipped team based mods for our characters, and designed roles for each player to fulfill.  The new bank system, that allows for storage of weapons and items outside of your character's inventory slots isn't only helpful in this, it's a necessity.  Kudos to Gearbox for including it.

Overall Mad Moxxi's Underdome Riot is a nice addition to Borderlands.  It's just different enough to feel fresh, and seems to have the legs to carry it for a some time.  Once again, like Dr. Ned, Gearbox has gone above and beyond with the presentation with a piece of content.  While I personally don't feel the need to play four hour monster sessions to get some decent weapons and a skill point, there's plenty of players out there who will - and have.  While they do that I'll be busy talking to Moxxi who's looking for her 4th husband - I'm pretty sure she's wearing her panties on top of her clothes.

Contest time:  If you are interested in winning an Xbox 360 code for Mad Moxxi's Underdome Riot, simply leave a comment below.  We'll draw a winner on Wednesday, January 6th 2010 at 8AM EST.

Max Moxxi's Underdome Riot is out now for the Xbox 360, will be available this week for the PlayStation 3 - and has yet to be dated for the PC.  The cost is $10.