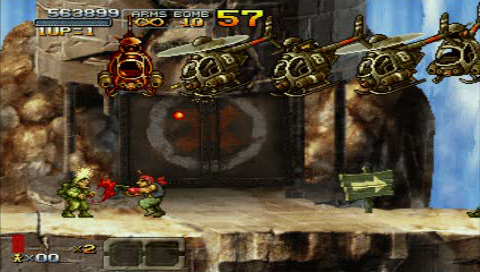 Metal Slug XX has officially promised lots of bullets, lots of explosions, and lots of characters. Sticking with the 2D classic graphics by SNK, being brought to us by Atlus, Metal Slug XX (pronounced "double x") will be arriving to the U.S. late February complete with ad-hoc co-op for $19.99. With an approaching release, we get our first formal look at the available characters and specialties for Metal Slug XX.

First, we have Eri Kasamoto. Her specialty is double the quantity of grenades with double the grenade replenishment.

"Eri began life as an orphan abandoned on the steps of a church. Once she caught on to the ways of the world, she left the church behind and became leader of a band of street kids. At that time, she was recruited by the Army's Intel Division who saw promise in her innate ability for combat. After being heavily trained in the art of subversive activities, she became a first-class assassin and saboteur.

In the following years, she completed numerous dangerous missions, but ultimately grew tired of doing dirty work, which left her only with a terrible sense of remorse. She requested a transfer to the SOG (Special Operations Group) known as the S.P.A.R.R.O.W.S. Normally, such a request would be ignored by the top brass, but in Eri's case, they decided to make an exception because of her exceptional service record. She demonstrated unparalleled ability by quelling General Morden's second coup and was promoted to Staff Sergeant."

Next up is Marco Rossi, who has double handgun power for his special.

"An Italian-American computer whiz, Marco entered Special Military Engineering college after graduating from an industrial trade school. Once he graduated, he joined a special forces unit known as the Peregrine Falcons. Marco is generally a good-natured man, but the mere mention of General Morden's name causes Marco to fall into a rage after having lost countless family and friends over the years to the General's various attacks.

Although he is one of the top combat agents in the special forces unit, Marco has a rather quiet hobby: computer programming. One of his biggest shames is that a computer virus he initially created as a joke ended up infecting the DoD mainframe and nearly caused a nuclear launch. This is a secret that Marco will never share with anyone."

Tarma Rovin has stronger slugs and he can carry double the standard amount of cannon shells.

"The son of a distinguished serviceman, Tarma joined the Army's Special Warfare academy right out of junior high. When he was 20, he rescued the President and used this success to arrange for a transfer to the Peregrine Falcons. During the onset of the Great War, Tarma learn that his best friend Marco had enlisted to serve his country. Tarma immediately resigned from the Peregrine Falcons to serve on the frontlines with Marco, and together they fought bravely until the conflict ended. Both Tarma and Marco were promoted to Captain because of their actions in the war.

Away from the battlefield, Tarma is known to play practical joke or two on the over-serious Marco but pays his brother in arms the highest respects as a soldier. His hobby is creating customized motorcycles with a devotion to craftsmanship that puts professionals to shame. After the first major conflict with General Morden's forces, Tarma planned to retire and start a cycle shop of his own, but he was persuaded to come out of retirement by his superiors."

Fio Germi is a pretty awesome gal, ready to start the game with a heavy machine gun.

"The only daughter of the wealthy Germi family in Italy. The Germi family has always had a tradition of having at least one member of each generation in the military, and after Fio's birth her mother was unable to bear any more children. After graduating from college, Fio was enlisted in the Regular Army by her father in order to uphold this tradition. Fio's upbringing, filled with unconditional love and a lack of hardship, has given her an easy grace and a kind heart. Fio studied Chiropractics and Acupuncture in college, and hopes to become a sports doctor in the future."

Ralf Jones is twice as fast as any other character at close quarters combat, and has a super move.

"Ralf is known only as "Colonel" in the mercenary group. Other than this, the details of his career are shrouded in mystery. Rumor has it that he may have come from some other nation's Special Forces unit... or that he single-handedly brought down a secret criminal syndicate... Most of these rumblings can be dismissed as idle gossip or jokes. Ralf himself has never shown any interest in these rumors.

It would appear that Colonel Ralf is a good friend of the the unit's commander, but nobody knows how or when they first met. Ralf is also good buddies with Major Clark, true comrades-in-arms who have fought together in fierce battles. It's widely known, though still unconfirmed, that Ralf occasionally attends martial arts tournaments, and his hand-to-hand combat abilities easily overwhelm those of regular soldiers."

"The details of Major Clark's service record are unknown, though it seems that he's been in the mercenary group for several years. An old war buddy of Colonel Ralf, the two of them have fought alongside each other on any battlefield you could name. Like Colonel Ralf, his mysterious past is subject to lots of imaginative speculation, but his existing battle records are exceptional and the results of the martial arts tournaments he attends with Colonel Ralf speak loudly of his true combat ability.

On the battlefield, his fighting style is slightly different from Ralf's, but both of them are highly trained melee fighters. Enemy soldiers unlucky enough to encounter Major Clark in battle soon find themselves airborne, followed by a helpless face-first plummet into the ground."

Finally, Leona Heidern who has a powerful slash attack, and can jump twice as high as other characters.

What we've gathered from her is she's a quiet loner soldier who has issues connecting to others outside of combat. She grew up in a small village with her family. After a stranger came to the town to recruit young Leona, her family refused to let her go. As retaliation for the failed recruiting, this stranger (named "Goenitz") slaughters the entire village. As a teen, Leona became a very capable mercenary, eventually finding a home with the Ikari mercenaries.

This group of fighters are your weapons, and they're happy to fight side-by-side to take care of business.