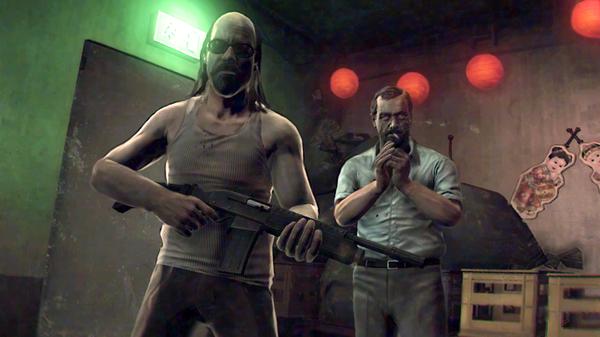 Square-Enix is out and about promoting their upcoming sequel to Kane and Lynch, and there's plenty of coverage all over the net.

The overwhelming focus of all the previews seems to be on the game's graphical style, one that's gritty and in your face.  We've heard from the developers that the goal was to make it look like it was shot through an amateur camera uploaded to YouTube, but that's EXACTLY what it looks like according to the previews.  And it's the one defining feature that really sets Kane and Lynch 2: Dog Days apart from other 3rd person shooters.

..it looks like the game is being recorded on a handheld camera as you play, with all of the shaking and imperfections you'd expect from such a production.

It's as if the action has been taped and uploaded to YouTube -- there's even an animated "Buffering..." message in place of a stock loading screen. The video pixelates when you're hit and loses sync when the camera's rocked by explosions.

There's lot of little touches to make it feel authentic.  When you get shot, bits of digital information are lost and the screen becomes pixelated. Like most cheap video cameras, the lights oversaturate the screen, causing light to bleed across pixels.  From all the previews it sounds very authentic.

Computer and Video Games focused on the PC version, which has seen a lot more attention paid to it this time around.

In fact, it's (Dog Days) been streamlined. IO want K&L2 to be a crowd-pleaser, and are focusing on stripping the annoyances that plagued Dead Men. The aiming has been tightened to remove the floaty, imprecise controls that brought a pot-luck element to the first's firefights. The original PC game demanded that co-op be played on one PC, using a combination of keyboard, mouse and Xbox 360 controller, but that's finally matured into online co-op with a friend controlling Kane. Giant Bomb weighs in as well, talking about some new gameplay mechanics.

Other gameplay mechanics include a "down not dead" system that, sort of like other third-person shooters, puts you in a downed state if you take too many hits. It sounds like you'll be able to recover on your own if you can get behind some cover and not take damage for awhile, though as it's a co-op shooter, you can obviously get a little help from your partner, as well.

You can bet when the game comes out the 2nd quarter of this year that the internet will be watching Giant Bomb's review.

Sadly it seems most of the previews weren't hands on, but rather a developer given demonstration.  So things like the poor control system, cover system, and other gameplay mechanics weren't able to be fully tested, despite being assured they've been "improved."

We hope to get some hands on time with the game this spring at PAX East or another event just for the game.  We'll be sure to bring you the latest news when we get it.