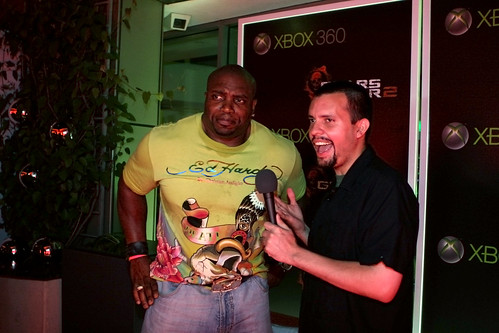 Last Monday night I was lucky enough to be invited to a pretty exclusive Gears of War 2 preview event.  Donned with celebrities like Lester Spreight (voice of Cole Train above), Zachary Levi (of NBC's Chuck fame) and numerous others; we all got our hands on with Gears 2's new co-op mode called Horde.

The way Horde mode works is similar to the Terrorist Hunt mode in the Ghost Recon games.  Basically it's you and your buddies versus endless waves of the Locust Horde...oh I get it now.  After clearing each successive wave there's a slight cool down period where you can gather weapons and ammo and then the next successive more difficult and larger wave comes.

Read on for more impressions.

The few matches I managed to sneak in (in between the margaritas) were an absolute blast.  Not only was team work essential, but there was also a scoring meta game on top of everything so there was also a competition between teams.  There's also an aggregate score for the entire team, this will presumably be used on online leaderboards so we can see who the top Horde teams are.

Granted it wasn't the most ideal setting, but the farthest we got was about the 5th or 6th wave before our entire team of five died.  Luckily you can revive fallen teammates, and fallen teammates can even slowly crawl their way to you to aid in revival, but even so we found it quite difficult to get very far.  That's not to say we didn't have fun.  A personal favorite was a new weapon that was basically a portable mortar cannon that you can fire into groups of oncoming Locust.

Graphically the game looked gorgeous, noticeably better than the original.  Smoke effects, lighting, textures - all look improved.  The final thing I noticed was the different "finishing" moves you can do to downed opponents.  Whether it's hitting their head golf club style, punching their face repeatedly, or simply using them as a meat shield; they were all very satisfying.

*Thanks to the Gamerscore Blog for the picture.