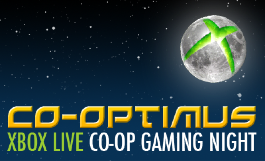 Our first co-op night of the new year is none other than Gears of War 2.  We'll be playing the 2 player campaign mode in co-op via Xbox Live as well as the 5 player co-op Horde mode.  The fun bbegins at 7:30 PM Eastern on January 15th, 2009.

Gears of War 2 features a two player co-op mode through the game's entire story - this mode features drop in and drop out play as well as the ability for each player to choose their own respective difficulty.

The 5 player co-op Horde mode allows players to face off against wave after wave of increasingly difficult Locust horde.  Teamwork is essential for survival.

To join up simply use the game's built in match making features to find other co-op gamers.  There will be plenty of people looking to game!  You can also send a friend request to the gamertag co optimus and utilize the friends of friends feature to find other gamers.

So make sure you keep your lancer well oiled and gassed up, we look forward to seeing you on January 15th!  As always we'll be broadcasting a video feed right on this page!  So be sure to check it out.

Update:  We can now announce that we'll also have select members of the Gears of War 2 development team on hand to game with us.   Look for the following gamertags to join in!

Interesting Articles about Gears of War 2

Video Stream
We'll be back next month!