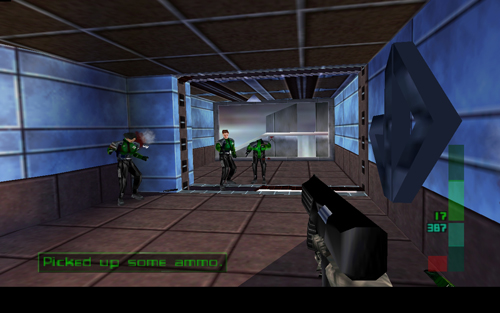 Microsoft's X10 event is underway, and the first bit of co-op news is confirmed.  Perfect Dark HD will launch this coming March as part of a new promotion called the Xbox LIVE Arcade Block Party.

Fire up your Farsight and prepare for assignment — the Dark returns this March as part of the Xbox LIVE Arcade Block Party. Agent Joanna Dark brings her epic tale of galactic conspiracies in future America to Xbox 360 with remastered visuals, LIVE-enabled multiplayer modes, leader boards, achievements and avatar awards.

No exact date or price was given, but it won't be long now till we can get some co-op action on.  Speaking of co-op, we're still trying to get confirmation on the number of players and the methods of play.  We hope the game remains true to its roots with split screen co-op as well as online play.

Update:  This video from 1UP suggests the game supports 8 player co-op!