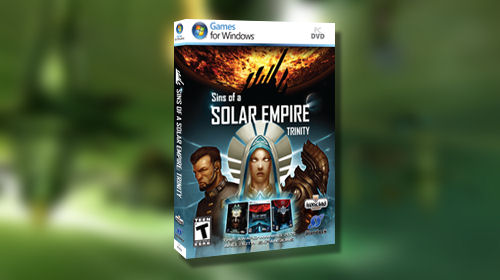 It seems like it was just yesterday when word of Ironclad Games' Sins of a Solar Empire: Trinity pack reached our ears.  December and January have come and gone so fast, and now this all-in-one bundle is available for your co-op enjoyment at the reasonable price of $39.95 through Stardock's Impulse platform, or local retail outlets.  As we mentioned before this pack not only includes the full version of Sins of a Solar Empire, a title we rather enjoyed, but the two expansions - Entrenchment and Diplomacy - as well.  Trust us when we say, that's a lot of co-op gaming in one box, and a good way to spend a possible three-day weekend.

“What is most unique about the micro-expansions is that they don’t just add content like other expansion packs, they actually change the fundamental core gameplay,” said Brad Wardell, CEO and president of Stardock. “Most expansion packs just add content like new maps or new weapons. With Diplomacy and Entrenchment you get those things too, but these micro-expansions go a lot further and actually change how the game is played. Trinity is the complete Sins of a Solar Empire experience and we’re proud of what we have been able to accomplish since its initial launch. For fans of this genre or fans looking for a great PC strategy game, it doesn’t get better than this.”

A complete breakdown of Trinity is as follows:

Sins of a Solar Empire -

Sins of a Solar Empire: Entrenchment -

Sins of a Solar Empire: Diplomacy -

- Faction Status: New relations status screen lets the player see what each faction thinks of one another and why
- New Pacts: Factions can establish various technology and resource pacts with one another, giving a substantial boost to themselves and an ally
- Issue Missions: Players can now create and issue missions to other factions and even the Pirates, adding a whole new dimension to competitive play
- Envoy Cruisers: New envoy cruisers give factions unique abilities that can lead to better relations with other empires
- New Technologies: 30+ technologies to research on the new Diplomacy tree
- Deadlier Pirates: Pirates are more fearsome than ever as they collect bounty awards on their targets
- New Victory Options: Win through new Diplomatic or Allied victory conditions