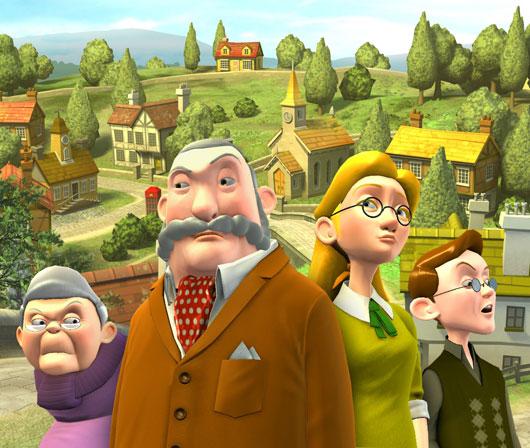 It is not often that we in the UK get to say this - "we had it first!"  However, in the case of Blue Toad Murder Files: The Mysteries of Little Riddle, this rarity has occured.  The 4-player co-op puzzle game is an exclusive title for the Playstation Network by developer Relentless Software, the makers of Buzz.  Parts 1 and 2 are already available in the UK, with part 3 coming soon and downloadable free for Brits.  A press release from Relentless has confirmed the US release dates and pricing as:

Blue Toad Murder Files follows four members of a crime solving team.  The game comes in six acts, each starting with a murder; the players must then investigate the death and interview the various suspects.  To do this, a series of Professor Layton type puzzle must be solved.  Although the game is promoted mainly as a 4 player co-operative title, it can also be played as 4 player versus.  Each player takes it in turn to solve a puzzle, and it is down to the players to decide amongst themselves whether they wish to aid one another.  Do you see yourself as a co-op or co-not player?

If this is not enough to sell you the game, according to Andrew Eades, the Executive Director of Relentless:

Blue Toad Murders is a thoroughly British game which doesn't take itself too seriously...  We hope North American gamers will enjoy poking fun at English stereotypes.

As a thoroughly British person I hope that our American cousins enjoy the friendly xenophobia that the game provides as well as its fiendish puzzles.  Check Co-Optimus soon for a review of the game.