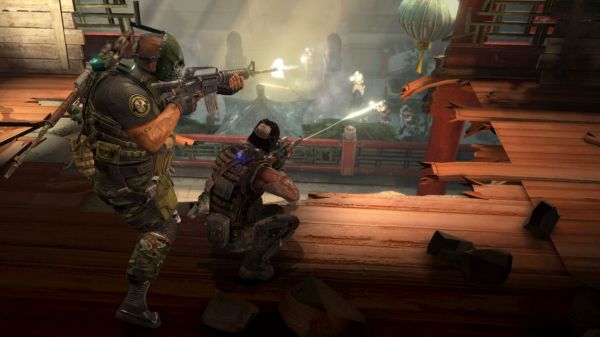 Those of you who follow the Army of Two Twitter account may have noticed a rather exciting announcement this morning: "DLC!!! First look at Chapters of Deceit, coming April 1st."  Despite the usual association made with April 1, it seems this no joke and that our co-op heroes from Army of Two: The 40th Day will be back for more action quite soon.  From the blog announcement: "Chapters of Deceit features two all-new co-op campaign maps. In the new chapters, players stumble upon information that could lead to ending the invasion by Jonah and his 40th Day Initiative army. However, they quickly learn that everyone is out for themselves and to trust no one but their partner."

The blog entry also came with a trailer for the new content that shows a few snippets from the chapters.  Based on the trailer, it appears that the Chapters of Deceit content will fall somewhere in the middle of Salem's and Rios' trip through Shanghai, as one part shows Salem looking down a sniper scope at the 40th Day Initiative's leader, Jonah.  The new chapters will cost $9.99, or 800

, and I'm pretty excited about getting to spend some more time with Salem and Rios; it's just too bad the DLC doesn't include anything for Extraction.  Hopefully, there will be future DLC to add more maps (and more guns) to that mode at some point.