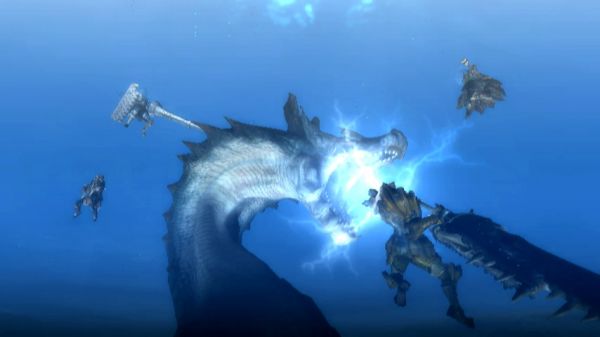 Hot out of Nintendo's media summit yesterday in San Francisco comes a handful of Monster Hunter Tri news for the Wii.  The biggest news is that the game will be free to play online, something that wasn't a luxury for Japanese gamers who had to fork over $8 a month to play.

If you do play the four player co-op mode online, you can use Nintendo's Wii-speak microphone attachment to communicate with players.  As we reported earlier, the game will be bundled with the new Classic Controller Pro which will retail for $59.99, or you can buy the game separately for $49.99.

The game will have a demo available, but only if you pre-order from Gamestop.  That means if you want to get the game this spring you'll need to form your own hunting party and head to the mall.

While Monster Hunter hasn't caught on here like it has in Japan, with over 11 million units sold through the entire series; it sounds like Capcom is getting some serious marketing muscle behind this release in North America.  Only time will tell if it's worth the effort.

Update:  Capcom has posted a clarification saying the demo does not require a pre-order.  Simply walk into gamestop and pick it up.